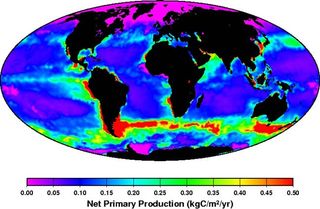 They are the very lowest rung of the marine food chain, but microscopic plants in the world's oceans generate five times more power than is consumed by all the humans in the world, according to a new study.

Scientists estimate that ocean phytoplankton generate about 63 terawatts [image] of chemical power every year. One terawatt equals a trillion watts. In 2001, humans collectively consumed about 13.5 terawatts.

The study also found that the movements of all of the ocean's marine life—from lowly phytoplankton to the largest whales—play a crucial role in bringing cold water from the ocean's depths to the surface. This ocean churning is what powers the global circulation of warm and cold water and is an important factor in the Earth's climate.

"We have predicted that the amount of mixing caused by ocean swimmers is comparable to the deep ocean mixing caused by the wind blowing on the ocean surface and the effects of the tides," said study leader William Dewar of Florida State University.

Humans might be inadvertently affecting this important ocean "biomixing" through their decimation of whales and big fish populations, the researchers say.

The findings will be detailed in an upcoming issue of the Journal of Marine Research.