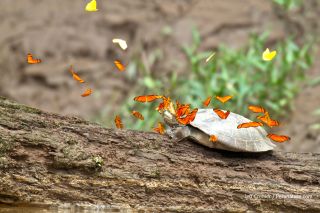 Butterflies in the Amazon have been observed flocking onto the heads of turtles to drink their tears, which provide the animals with a vital source of the mineral sodium.
(Image: © Jeff Cremer / Perunature.com)

Cute animals are an Internet genre of their own. But sometimes, Mother Nature's creations are downright weird.

The past year had its share of bizarre animal discoveries, from butterflies that feast on the tears of turtles to a two-headed shark fetus. Speaking of shark fetuses, they can sense predators even while they're still in their egg cases. Like we said: weird.

Read on for some of the strangest animal discoveries of 2013.

The Nopoli rock-climbing goby (Sicyopterus stimpsoni), found throughout Hawaii, has a strange talent: It can climb its way up waterfalls 300 feet (100 meters) tall, using an ancillary mouth sucker. To put that in perspective: If the rock-climbing goby were human, the equivalent would be running a marathon vertically, against running water, Clemson University biomechanist Richard Blob told LiveScience.

In January 2013, Blob reported that the muscles the goby uses to climb are the same ones it uses to feed. So make that running a vertical marathon against running water … with your mouth.

While some sharks give live birth, others deposit egg cases called mermaid's purses in the water. The shark fetuses in these egg cases are relatively defenseless, but the fetuses of bamboo sharks do have one protective trick up their sleeves. When a predator is nearby, the fetuses can detect its electrical field and freeze, so the predator is less likely to see them. [See Video & Images of Developing Bamboo Sharks]

3. Tadpoles with eyes on their tails

This one is on scientists. In February 2013, researchers reported that they had created 134 franken-tadpoles with eyes on their tails and torsos instead of on their heads. The experiment was done by surgically grafting eyeballs into these odd places and then removing the tadpoles' original eyes.

Why, you might ask? It turns out that the results could be used to treat blindness by shedding light on how the nervous system adapts. The tadpoles with eyes on their tails could actually see, the researchers found. [See Images of the Odd-Eyed Tadpoles]

Don't look now, but spiders that eat bats are all around.

A March 2013 study revealed that bat-eating spiders live on every continent except Antarctica. After a web-building spider species (Argiope savignyi) and a terrifying tarantula species (Poecilotheria rufilata) were found to kill and eat small bats, researchers got interested in how common it was for spiders to eat bats. They combed through 100 years of scientific reports and observations and found 52 instances worldwide. Most of the time, spiders prey on bats in the tropics, particularly the toasty regions of North and South America.

Had this shark fetus survived, it would have had a promising career as a circus attraction. In March 2013, researchers reported the strange case of a pregnant bull shark caught off the Florida Keys. One of the shark's fetuses (which are live in utero in this species), had not one, but two heads.

The deformity arose when the shark embryo attempted to split into twins early in development, but failed. It would not have survived long, if at all, in the wild, researchers said.

The squeamish and kind-hearted should look away. In August 2013, researchers captured on camera a boa constrictor eating a howler monkey whole.

Snake attacks on primates are rarely reported, making this video surprising. Usually, primates find protection in numbers, as they tend to live with family groups. In this particular case, the monkey wandered too far from its group and failed to see the boa. After the boa swallowed the monkey, the primate's outline can be seen distorting its body. [Video of Boa Eating Monkey]

"I'll drink your tears!" sounds like something a particularly overwrought villain might say in a fantasy tale, but for butterflies in the western Amazon rainforest, it's a way of life.

Butterflies congregate on yellow-spotted river turtles to drink their tears, researchers said in September. The motivation? Minerals. Salt is scarce in the western Amazon, and herbivores like butterflies (and bees, which have also been seen supping on turtle tears) struggle to get enough. Other than temporarily obstructing the turtles' vision, the tear-drinking likely has little effect on the reptiles.

Flower power gets the orchid mantis its meals, but not in the same way the hippies had in mind.

The orchid mantis is like several other insects in that it mimics the look of a harmless plant. But while most mimics disguise themselves from predators, the orchid mantis is a predator. And its flowery look actually attracts its prey, particularly pollinators like bees and butterflies. The mantis is the only animal in the world known to mimic a flower blossom to attract prey, researchers reported in November 2013.

Just in time for Christmas, researchers made a creepy December announcement. A cold-weather-loving cockroach is colonizing New York.

The roach (Periplaneta japonica) may have hitched a ride into the Big Apple from Asia on ornamental plants used in the High Line park, which opened in 2009. The plants in the park are mostly native, but may have been contaminated by roaches at nurseries where local and international species sit side-by-side.

Despite their ability to survive in snow, the roaches aren't expected to be a major new pest, as they'll have to compete with good old-fashioned New York roaches for food and space.

10. Alligators and crocodiles use tools

Did you spend 2013 worrying about robots becoming sentient or zombies taking over? Well, what you should have been stressing about was enormous toothy reptiles developing the ability to use tools to destroy us all.

Actually, alligators and crocodiles have apparently been using tools for some time. They adorn their bodies with small sticks to lure birds looking for nesting materials, scientists reported in December 2013. When the birds get close, snap go the jaws. Bye, bye birdie.

Alligators in Louisiana and crocs in India both engage in this behavior, researchers found, but only near bird nest sites and during nesting season. It's the first convincing evidence of reptiles using tools.