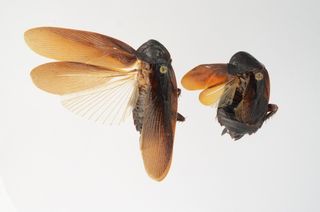 A new species of cockroach that can withstand freezing temperatures has taken up residence in New York, scientists confirmed.

The resilient critter, Periplaneta japonica, had never been seen in the United States until an exterminator spotted some strange-looking roach carcasses last year on the High Line, a mile-long park built on an old elevated railway in Manhattan. Researchers confirmed the identity of the species, which is native to Asia and notable for its ability to thrive in cold climates, unlike the American cockroaches that populate New York and take shelter indoors when winter comes.

"About 20 years ago colleagues of ours in Japan reared nymphs of this species and measured their tolerance to being able to survive in snow," Rutgers insect biologist Jessica Ware said in a statement. "As the species has invaded Korea and China, there has been some confirmation that it does very well in cold climates, so it is very conceivable that it could live outdoors during winter in New York. That is in addition to its being well suited to live indoors alongside the species that already are here." [Alien Invaders: Photos of Destructive Invasive Species]

Ware and colleagues say it will be difficult to trace the source of the species, but they suspect Periplaneta japonica arrived in New York in the soil of one of the plants along the High Line, which first opened in 2009 and is still partially under construction. Though the High Line's gardens have a focus on native plants, Ware noted that many nurseries in the United States have native plants alongside imported ones.

"If we discover more populations in the U.S., we could trace their genes back to try to figure out their exact sources," Rutgers doctoral student Dominic Evangelista added in a statement.

It may be too soon to predict the impact of the species' arrival, but the researchers say the cockroaches are unlikely to be major nuisances in the Big Apple.

"Because this species is very similar to cockroach species that already exist in the urban environment, they likely will compete with each other for space and for food," said Evangelista. Ware added that their numbers inside buildings could actually drop if they start spending more time and energy competing with each other instead of reproducing.

And there's a chance that grime could be on New Yorkers' side. The Asian researchers only studied Periplaneta japonica in clean snow, Ware noted, saying, "I don't know how well it would do in dirty New York snow."

As for an Asian-American hybrid super-roach, the researchers said the possibility is unlikely.

"The male and female genitalia fit together like a lock and key and that differs by species," Evangelista said. "So we assume that one won't fit the other."

The research was detailed in the Journal of Economic Entomology.