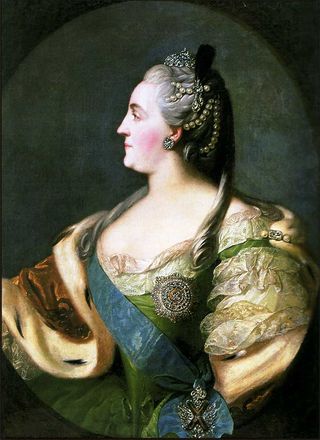 This portrait of Russia's Empress Catherine II was painted in 1763 by Fyodor Rokotov.
(Image: © Public domain)

Catherine II, also known as Catherine the Great, was an empress of Russia who ruled from 1762-1796, the longest reign of any female Russian leader. Known more for her affairs of the heart than for affairs of state, she nevertheless greatly expanded her country's empire. Her accomplishments are often overshadowed by the legends and rumors about her scandalous personal life.

Sophie von Anhalt-Zerbst was born in 1729, the daughter of a Prussian prince. In her teenage years, she was married, unhappily, to a Russian prince who would become Emperor Peter III. She took on the name Catherine, or Ekaterina Alekseyevna. Peter was regarded by some as inept, and after only six months on the throne, Catherine overthrew him with the aid of Grigory Orlov, a military officer with whom she was having an affair. Her husband was later arrested and killed, securing her position on the throne.

Some regard Catherine as a socially enlightened ruler; she exchanged correspondence with the French philosopher Voltaire. She was a patron of the arts; the Hermitage Museum opened during her reign, beginning as part of her personal collection. Under her influence, Russians adopted western European philosophies and culture.

Catherine's rule brought about something of a golden period for female artists. While it was Peter I (reign 1682-1725) that brought about reforms that gave women greater freedom to pursue education it was during the mid-18th century, the time that Catherine the Great rose to power, that female artists also rose in Russia.

"Brandishing their newly won literacy, Russian women writers and poets, followed closely by Russian women composers, set pen to paper, starting in the mid-1700s," wrote Anne Harley, a professor of music at Scripps College, in a paper published in 2015 in the "Journal of Singing."

These female artists tended to be from the aristocratic class but they followed the lead of Catherine II ("the great") and other women who held power in Russia in the 18th century. "These female aristocrats followed a new model of empowered and extremely cultured womanhood, modeled by four women who ruled the Russian empire for more than two-thirds of the 18th century: Catherine I, Anna, Elisabeth, and Catherine II," wrote Harley in her paper.

Among the most prolific Russian female artists was Princess Natalia Ivanovna Kurakina (lived 1768-1831) who wrote at least 45 songs. "Kurakina's songs were so popular that Breitkopf (Petersburg) published a collection of eight of her French romances in 1795," wrote Harley.

Catherine was also a successful military ruler; her troops conquered a great deal of new territory. She also allowed a system of serfdom to continue in Russia, something that would contribute to a full-fledged revolt led by a pretender to the throne.

Catherine had no claim whatsoever to the Russian throne, according to Isabel de Madariaga, a professor emeritus of Slavonic Studies at the University of London in the opening of her book "A Short History of Catherine the Great" (Yale University Press, 2002).

Madariaga wrote that Catherine's opportunity came when her husband ascended to the throne as Peter III at the end of 1761. The two of them hated each other, and he ruled ineptly. “Though not stupid, he was totally lacking in common sense, and he quickly set about alienating all the powerful parties at court,” Madariaga wrote. He embarked on a seemingly pointless military campaign against Denmark, alienated the Orthodox clergy by attempting to take over church lands and even tried to marry his mistress.

“Most of his policies were so unpopular at court, so lacking in judgment, that several groups started plotting to dethrone him,” wrote Madariaga. Catherine got the jump on the others through her romantic relationship with Grigory Orlov, an officer in the Russian Guards. With the support of local military units, Catherine was proclaimed Empress of Russia in July 1762 while her husband was away from St. Petersburg, the capital. Peter III was then arrested, forced to abdicate the throne and ultimately killed.

Orlov would be one of many lovers that Catherine would have in her life. She alluded to her habit of often switching lovers in a letter she wrote to Prince Grigory Potemkin, a military leader with whom she had an affair in 1774-1775.

“The trouble is that my heart is loath to remain even one hour without love. It is said that human vices are often concealed under the cloak of kindness, and it is possible that such a disposition of the heart is more of a vice than a virtue, but I ought not to write this to you, for you might stop loving me or refuse to go to the army fearing I should forget you…” (From the book "The Russian Chronicles," 1998, Quadrillion Publishing, edited by Joseph Ryan)

Catherine started her reign with Russia already in a relatively favorable military position. Before her reign, Russia’s military had defeated the forces of Frederick the Great, king of Prussia, in battles at Gross-Jägersdorf (in 1757) and Kunersdorf (1759), victories that left Russia in a powerful position in Eastern Europe, wrote Simon Dixon, a professor at University College London, in his book "Catherine the Great" (Profile Books, 2009). He noted that with the death of the Polish king, Augustus III, in 1763, she was able to put one of her lovers, Stanislaw Poniatowski, on the Polish throne.

Poniatowski and Catherine ended up getting more than they bargained for. Catherine insisted that he grant rights to Poland’s Orthodox and Protestant worshipers, something that offended many Polish Catholics. This issue led to a rebellion, and in the end Russian troops were sent into Poland to support Poniatowski. The presence of these Russian troops raised concerns among neighboring states that Russia had ambitions on their own territories, wrote researcher Robert Massie in his book "Catherine the Great: Portrait of a Woman" (Random House, 2011).

Massie noted that the sultan of Turkey felt the most threatened, fearing that Russian troops in Poland would be able to pour into the Balkans, threatening Istanbul itself. After discussions with French diplomats, and an incident with Russian troops at the Turkish border in October 1768, Turkey declared war on Russia.

Frederick the Great felt that the war would amount to nothing, wrote Massie, noting that the Prussian king called it a contest between “the one-eyed and the blind.” This was to be proven wrong, however, as Russian troops made rapid advances in 1769, following them up with pivotal victories over the Turkish army at the Battles of Larga and Kagul, both fought in the summer of 1770. Also in 1770, a Russian naval squadron reached the eastern Mediterranean, inflicting a defeat on the Turkish fleet.

Catherine’s engagements in Poland and against Turkey worked favorably for her, noted Massie. In 1772, Poland was partitioned between Russia, Austria and Prussia, with subsequent partitions occurring in 1793 and 1795. Additionally, in 1774, after Russian troops were in a position to threaten Istanbul, Turkey sued for peace, with Russia gaining territories on the Black Sea coast and the Sea of Azov area.

Although Catherine didn’t go into battle personally, delegating that responsibility to those with military expertise, she had proven her military mettle, gaining a vast amount of new territory and influence for Russia.

While Catherine enjoyed great military success, internally her country had a precarious social structure. Much of the population lived as serfs, in essence a form of slave. Their living conditions were horrible; Massie noted that few of the serfs working in the mines, foundries and factories lived to middle age.

Although Catherine is said to have personally opposed the institution, she tolerated it. In 1767, her government even published a decree condemning serfs who protested about their conditions.

“And should it so happen that even after the publication of the present decree of Her Imperial Majesty any serfs and peasants should cease to give the proper obedience to their landlords ... and should make bold to submit unlawful petitions complaining of their landlords, and especially to petition Her Imperial Majesty personally, then both those who make the complaints and those who write up the petitions shall be punished by the knout (whip) and forthwith deported to Nerchinsk to penal servitude for life…” read part of it. (Translation by G. Vernadsky from "A Source Book for Russian History" volume two, New Haven: Yale University Press, 1972, through Fordham University website)

Catherine’s treatment of the serfs would come back to haunt her in 1773, when a man named Yemelyan Pugachev claimed to be Peter III (Catherine’s executed husband) and staged an insurrection. Much of his rhetoric focused on gaining support from serfs and others from Russia’s lower classes.

“We release you from all the taxes and financial burdens formerly inflicted on the peasants and all the people by wicked nobility and by bribe-taking town judges …” he decreed as he approached the town of Penza, offering the people land ownership. In the end, Pugachev was captured and executed, and the institution of serfdom continued on after Catherine’s death (Source of translation: the book "The Russian Chronicles").

Catherine died quietly in her bed on Nov. 17, 1796, at the age of 67 after suffering a stroke. After her death, her enemies spread gossip about her that has endured for centuries: that she had died while having sex with a horse. Others claimed that she died on the toilet. Neither rumor was true.

Catherine was succeeded by Paul I, who was supposedly her son with Peter III (Paul’s true father may have been Sergei Saltykov, one of Catherine’s lovers). In any event, Paul did not last long on the throne; he was assassinated in 1801.

While the institution of serfdom would gradually be abolished in Russia during the 19th century, the wide gap in wealth between the nobility and peasantry would continue on. These social problems came to a boiling point once again after Russia entered World War I in 1914. As Russia’s military position worsened and social conditions deteriorated at home, the Russian royal house lost support, with Nicholas II being executed in 1918, effectively ending the Russian royal family. The resulting civil war would see the rise of the world’s first communist state, one that would eventually become a global superpower.