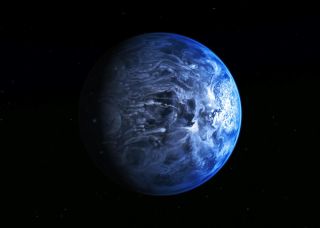 From the confirmation of long-sought elementary particles to the discovery of a lost lake on Mars, 2013 has been an exciting year in science. But did it live up to expectations?

Researchers confirmed the existence of the Higgs boson particle in March, made a strong case for human-caused climate change in September and analyzed the oldest-known human DNA in December. They explored the site of a former lake on planet Mars, and speculated that perhaps fresh water still flows on the Red Planet.

Last year, LiveScience reached out to scientists in different fields and asked them for their science wishes for 2013. To find out if any of the advances of this year made those wishes come true, we re-contacted those same researchers. Here's what they had to say.

All Tara Shears wanted for 2013 was to see the Standard Model of particle physics take a few hits. The Standard Model is the dominant theory of how fundamental particles interact. Researchers had hoped the Higgs boson, which was predicted by the Standard Model but not confirmed until this year, would buck expectations and give physicists some fresh mysteries to uncover. Unfortunately, the particle behaved as predicted. [Twisted Physics: 7 Mind-Blowing Findings]

Similarly, Shears told LiveScience, 2013 brought steps forward, like observing antimatter and matter behavior for the first time in some particles. (Antimatter is like matter on opposite day: Particles of the stuff have properties opposite that of normal matter.) But the behavior was exactly what the Standard Model predicted.

"The problem is that the Standard Model predictions are just too small to explain what goes on in the universe," said Shears of the University of Liverpool. "We might have made experimental strides forward, but we haven't yet improved our underlying understanding."

The years have brought advances in understanding dark matter, the theoretical matter that explains a large amount of mass missing from the known matter in the universe, Shears added.

At the end of 2012, Claire Parkinson, a climatologist at NASA's Goddard Space Flight Center in Greenbelt, Md., was hoping for a thaw. Not a literal thaw — few climatologists want to see any more ice melt — but a warming of relations between climate scientists and those who vociferously deny the science of human-caused warming. Nasty debate was getting in the way of progress in coping with climate change, Parkinson said.

So how did the discussion fare in 2013? Parkinson isn't sure it's gotten any more productive overall, but she sees hopeful signs. Scientists in the field have become less likely to denounce detractors, she told LiveScience.

"A balanced, nonconfrontational discussion can help both the progress of the science and progress toward enacting effective policies based on the science," Parkinson said.

Potentially habitable planets were the 2013 dream of Abel Mendez, head of the Planetary Habitability Laboratory at the University of Puerto Rico at Arecibo. Mendez was hoping for the 2013 discovery of an "Earth 2.0," an Earth-size planet outside of our solar system that could support life. [13 Ways to Hunt Intelligent Aliens]

He got what he wanted — sort of, he told LiveScience. Several new potentially habitable exoplanets were found, though none were precisely Earth-like. The data collected by the Kepler space telescope this year may reveal more, Mendez said, referring to the sun-orbiting telescope launched in 2009 and whose mission was to detect Earth-like planets in the Milky Way. Though Kepler's planet-hunting has come to a halt due to damage to its reaction wheels, there's still plenty of data to sift through, scientists say.

"We did get a better understanding on the frequency of Earth-like planets," Mendez said. He and his colleagues created a website, The Habitable Universe, to track estimates of the number of potential habitable planets in the universe.

Michael Joyner, a physiologist at the Mayo Clinic, wasn't expecting the discovery of the fountain of youth in 2013. But the longevity field uncovered some interesting gems, anyway. In good news for food lovers, studies threw doubt on the idea that restricting calories to very low levels might extend life span in humans.

"A more nuanced view of this is emerging," Joyner told LiveScience.

The field is also increasingly focusing not just on extending life span, but extending "health span," he said. Growing old is not as fun if a person spends most of their retirement frail and sick. New research is increasingly showing that fitness predicts life span, Joyner wrote in an article for Outside magazine. Adding challenging strength and agility training to workouts may end up adding more years to your life than simply exercise alone.

Mysteries of the mind

Duke University psychiatrist Allen Frances ended 2012 by criticizing the new revision of the mental health bible the Diagnostic and Statistical Manual of Mental Disorders (DSM). The revisions were published in May despite criticism by Francis and other mental health professionals. Even so, Frances said he has seen progress in his fight against "overtesting, overdiagnosing and overtreatment."

For example, Frances said, the British Medical Journal and the health care advocacy group the Lown Institute both sponsored conferences this year to grapple with issues of overuse of medicine. A new initiative, Choosing Wisely, promotes discussion between patients and doctors to discuss the necessity of certain tests that can lead to potentially harmful overtreatment. Meanwhile, consumer information is getting better, too, Frances said. [Top 10 Mysteries of the Mind]

"Scientific and media coverage … encourages skepticism about medical hype rather than trumpeting it," he said.

Another anti-medicalization effort is dxsummit.org, co-chaired by Frank Farley, the former president of the American Psychological Association and now a professor at Temple University. The psychology community had a "strong year" in working toward better psychiatric and psychological diagnostics, Farley told LiveScience. Psychologists also tackled problems of publication bias head-on, he said, referring to a tendency for studies that are new and flashy to get more space in the journals than replications of previous work; that's the case even though replications are what show that science is strong. As a result, lots of oft-cited results have not been replicated, casting doubt on their veracity.

"Some scientific societies in psychology began substantial discussion about the need to replicate, and some individual researchers began the process of replicating prior important studies and findings," Farley said.

Farley's other 2013 wish has not been as fruitful. In the wake of the Newtown, Conn., mass shooting at an elementary school in 2012, Farley called for a "National Violence Project" to address the root causes of violence in society. Nothing of the sort has materialized.

"Among those scholars who argue that some increased gun control is essential, there is disappointment," Farley said. "Much focus has been directed at mental health efforts, and hopefully may bear fruit, but many years, and improved identification and diagnostics, will be needed."