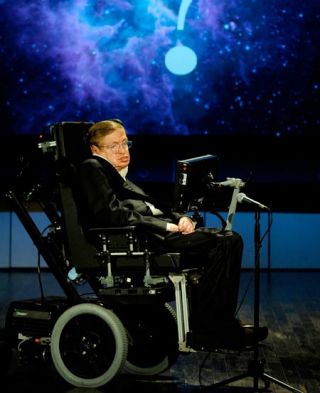 Professor Stephen Hawking speaks about "Why We Should Go into Space" for the NASA Lecture Series, April 21, 2008.
(Image: © NASA/Paul Alers)

The discovery of the once-elusive Higgs boson particle after a decades-long hunt is widely regarded as a major breakthrough, but legendary physicist Stephen Hawking thinks the field would actually be more "interesting" if the Higgs had remained a mystery.

"Physics would be far more interesting if it had not been found," Hawking told an audience at the Science Museum in London this week, according to The Guardian.

The Higgs boson is an elementary particle that is thought to explain why other fundamental particles have mass. Its discovery in July 2012, at the Large Hadron Collider housed at CERN's physics lab in Geneva, Switzerland, represented the final piece of the puzzle predicted by the Standard Model, the reigning theory of particle physics. [Top 5 Implications of Finding the Higgs Boson]

Last month, the Royal Swedish Academy of Sciences awarded the Nobel Prize in physics to Francois Englert of Belgium and Peter Higgs of the United Kingdom, for their research in 1964 on the theory of particle masses, which established the foundation for the discovery of the Higgs particle.

But, had the Higgs not been found, physicists might have been required to rethink some of the prevailing ideas about the nature of particles, launching investigations into other "interesting" and tantalizingly unanswered questions, Hawking suggested.

Still, the search for the Higgs boson, and its subsequent discovery, received widespread attention, including early debates about whether the long-sought particle had actually been detected or not.

Hawking's initial doubts about the discovery ended up costing him. "I had a bet with Gordon Kane of Michigan University that the Higgs particle wouldn’t be found," Hawking said, as reported by The Guardian. "The Nobel prize cost me $100."

Hawking spoke at an event earlier this week to celebrate the opening of a new exhibit about the Large Hadron Collider, the world's largest atom smasher, at the Science Museum in London.

In addition to talking about the discovery of the Higgs particle, Hawking discussed some of the other theories he hopes will be probed by scientists at CERN.

One is supersymmetry, a popular theory based on the idea that all of the known subatomic particles have "superpartner" particles that have yet to be observed. If these superpartners do exist, scientists could begin to explain some of the most enigmatic riddles in physics, such as the nature of dark matter, which is an invisible substance thought to make up a quarter of the universe. Scientists think dark matter may be composed of as-yet-undetected supersymmetric particles.

"I think the discovery of supersymmetric partners for the known particles would revolutionize our understanding of the universe," Hawking said.