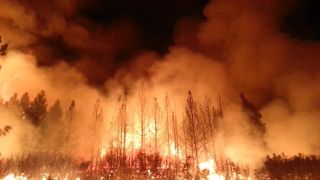 This photograph shows the Rim Fire burning in California at night on August 21, 2013.
(Image: © InciWeb)

SAN FRANCISCO — Wildfires in the western United States are getting worse, and human-caused climate change may be the main culprit in the hotter, more dangerous infernos, new research suggests.

"We're seeing an increase in fire activity across the western United States, and we're seeing it in many different facets of fire activity," study co-author Philip Dennison, a geographer at the University of Utah, said Tuesday (Dec. 10) here at the annual meeting of the American Geophysical Union. "Total area burned, number of fires and the size of the largest fires are all increasing."

Though Dennison's study isn't the first to suggest that climate change may be fueling more Western wildfires, past studies often looked at limited data sets, ruled out private or public lands, or were limited to smaller regions of the country.

Using data available from the Earth-observing Landsat satellite, the team looked at all the Western fires that burned more than 1,000 acres (400 hectares) of both public and private land starting in 1984. That amounted to more than 6,000 fires.

Across the West, in both grasslands and high mountain forests, wildfires seem to be getting worse, although there were regional variations in how that increased fire activity appeared.

In Southern California, for instance, where nearly all wildfires are started by people (whether by arson or accident), the total number of ignitions didn't increase. But those fires tended to become bigger, and the largest conflagrations are getting bigger, Dennison said. [Yosemite Aflame: Rim Fire in Photos]

In higher-elevation forests, infernos come earlier in the summer fire season, he said.

In any given region, there may be complex reasons for exactly why fire behavior has changed. For instance, in Southern California, hotter, drier weather — combined with changes in the Santa Ana winds — may have fanned the flames, whereas the invasive species cheatgrass may fuel forest fires in Colorado. In other areas, closely packed trees overgrown with younger saplings may provide "ladder fuels" that allow fire to ramp up easily, Dennison said.

The amount of data the researchers looked at is "too short to say for certain whether climate change is behind the trends we're seeing," Dennison told LiveScience.

But the trend seems to transcend regional conditions, ecosystem variations and fire-management practices, suggesting that larger climatic factors are at play.

To tease that out, Dennison and his colleagues looked at drought severity and temperature. In general, the Western region of the United States was getting hotter and drier during the same period, suggesting that the climatic changes associated with greenhouse-gas emissions are likely one of the culprits in worsening wildfires.

Despite the broad, regional trend, the strategies for fighting wildfires will likely be different in each ecosystem. Fighting the worsening infernos will likely involve combating invasive species like cheatgrass, thinning forests in some areas and only suppressing fires that threaten valuable life or property, Dennison said.

"There's no one strategy that will work for all fire regimes," Dennison said.