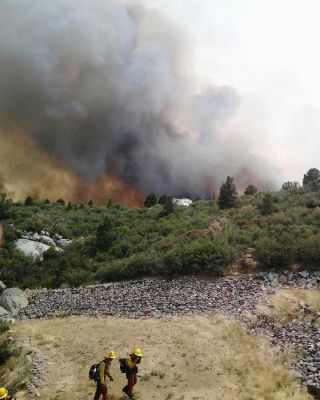 The western U.S. has seen large, destructive wildfires on a daily basis this summer. Already in 2013, the acreage burned is more than three times the size of Rhode Island. What's more, the worst may be yet to come. Large swathes of the western U.S. will remain at risk of significant burning through September, according to the National Interagency Fire Center . The NIFC attributes this prolonged risk to long-term drought along with record high temperatures and dry weather.

"Wildfires are not new. They have continuously occurred on Earth for at least the last 400 million years," says Jennifer Balch of Penn State University. But, she adds, research shows that since the 1970s, the frequency of wildfires has increased at least four-fold.

According to this research — a study published in 2006 by a team led by A.L. Westerlingof the Scripps Institution of Oceanography and the University of California, Merced — the total size of burn areas in the western U.S. increased at least six-fold in the later part of the 20th century. In addition, studies show that wildfires at high altitudes, which used to be rare, are increasing. (Thomas Swetnam of the University of Arizona discussed this finding during a 2009 National Science Foundation-sponsored teleconference.) This information means that large western wildfires are becoming more frequent and more intense.

Steadily rising, the cost of fighting U.S. wildfires totaled close to $2 billion in 2012, according to NIFC. According to Balch's most recent analysis, people started more than 80 percent of reported landscape fires that burned in the U.S. from 2001 to 2008.

Bigger and more frequent fires are linked to various types of human activities, including those that spread invasive species. A case in point: During the westward expansion, around 1880, settlers accidentally introduced to the west from Europe and Asia an invasive grass known as cheatgrass. Today, this plant covers more than 40,000 square kilometers of the western U.S., says Balch.

Scientists suspect that cheatgrass increases the number and severity of fires because it grows in arid lands and dries out before native vegetation does — a continuous carpet of fuel for fires.

An NSF-funded study conducted by Balch and other scientists shows that cheatgrass has been involved in a disproportionately large number of fires in the Great Basin, a 600,000-square kilometer area that includes parts of Nevada, Utah, Colorado, California and Oregon. "Over the past decade, cheatgrass fueled the majority of the largest fires, including 39 of the largest 50 fires, even though this species only dominates about 6 percent of the land in the Great Basin," said Balch. "In addition, cheatgrass burned twice as frequently as any other vegetation."

The Heat is On

Another factor promoting increased wildfires in the western U.S. is climate change, which is characterized by increased year-round temperatures, reduced precipitation and earlier springs. These changes:

At the same time, climate change increases the vulnerability of forests to bark beetle attacks. It does so by triggering droughts that subject trees to water stress, which reduces their resistance to bark beetle infestations — much the way that starvation reduces the resistance of people to infections.

Climate Change and Wildfires Reinforce Each Other

To make matters worse, the problem is not only that climate change promotes wildfires — but also that the reverse is true. That is, wildfires promote climate change. How? For one thing, wildfires char and darken the land. Darkened land absorbs more heat than non-charred, vegetated land. In addition, wildfires release carbon dioxide and methane — both of which are greenhouse gases that trap heat in the atmosphere and thereby help raise global temperatures. In fact, fires that people intentionally start to clear land of vegetation currently contribute up to one-fifth of human-caused increases in carbon dioxide emissions, according to a study conducted by Balch and other scientists.

The complex relationship between climate change and wildfires mean that areas that experience temperature increases and altered precipitation patterns may also experience more wildfires. And if wildfires occur more frequently across the globe, they will emit more greenhouse gases into the atmosphere.

An upsurge in wildfires raises pressing questions about fire management, says Balch. One management option, she says, is to reduce fuel for intense fires through prescribed and controlled burns — a trend that began during recent decades following almost 100 years of widespread fire suppression. But efforts to increase prescribed and controlled burns face major obstacles, including funding shortages during these lean economic times and a lack of support from the public, which is generally fearful of fires.

NSF is continuing to support research that will improve our understanding wildfire behavior. This topic is important because wildfire characteristics can change with maddening capriciousness over short distances and short time periods. In fact, a single wildfire may devastate one particular area but leave a similar, nearby area relatively unscathed because of even slight changes in time and space involving weather conditions, local winds, landscape features, microclimates, day-to-night changes in atmospheric conditions, soil moisture and the types and distribution of vegetation.

To better define the influence of these and other factors on wildfire behavior, a study of the causes and impacts of the High Park wildfire in northern Colorado, which started on June 9, 2012, is being jointly conducted by Colorado State University and the NSF-funded National Ecological Observatory Network, headquartered in Boulder, Colo.

The High Park wildfire was selected for study because it was among the worst wildfires in Colorado history and because CSU researchers had fortuitously been studying the area before the fire started, and had thereby generated rare, pre-fire baseline data on area ecology.

Critical components of the High Park study are flyovers of the burn scar and adjacent areas by a Twin Otter airplane that collects ecological measurements with state-of-the-art remote-sensing instruments. These instruments can quickly collect high-resolution measurements down to 1 meter and capture data from much larger areas than can ground sensors or field crews. In fact, these instruments may measure the individual tree heights, leaf area and leaf chemistry of 15 million trees in a single flyover.

High Park data — which will offer unparalleled precision related to the extent and condition of surviving vegetation, plant species, ash cover, soil properties and other factors — are being incorporated into high-definition, 3-D images as well as other types of rich ecological data covering the study area. Release to the public of High Park data is slated to begin later in 2013.

Results from the High Park study may help scientists understand how preexisting conditions defined by the CSU data influenced the behavior and severity of the fire and how the fire's burn patterns are affecting recovery of vegetation, wildlife and water resources. They may also support regional recovery efforts conducted by the U.S. and state forest service and the cities of Fort Collins and Greeley, Colo. — both of which have water supplies that are likely to be affected by post-fire erosion. And they may ultimately be used to help refine models of fire behavior and help improve future firefighting and post-fire management decisions.