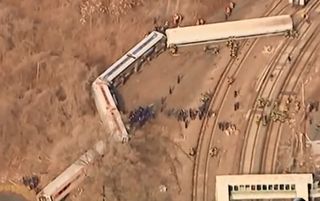 The scene of a passenger train derailment in New York City on Sunday, Dec. 1, 2013.
(Image: © YouTube screengrab from ABC News)

Modern methods of transportation, such as airplanes, high-speed trains and public highways, rarely make news — until, that is, something goes wrong.

And something went terribly wrong this week, when a commuter train in New York City derailed at high speeds, killing four passengers and injuring more than 60 people. The accident is the first fatal crash for Metro-North since the train operator began service in 1982, according to NBC News.

Accidents like these — occurring on buses, airplanes, roadways and trains — will probably never stop completely, but a number of technology innovations could help prevent many accidents in the near future. [The 5 Real Hazards of Air Travel]

Runway status lights: Many of the deadliest airplane accidents happen not in the air, but on the runway. In 2006, an accident in Lexington, Ky., killed 49 people, when a pilot used the wrong runway for takeoff. An airplane went off the runway at Denver International Airport in 2008, resulting in a fire and injuring dozens of passengers and crew, according to the National Transportation Safety Board (NTSB).

Runway status lights, embedded in the pavement of runways and taxiways, tell pilots and tarmac vehicle operators when runways are not safe to cross or enter. Runway entrance lights, for example, change color to indicate the status of the runway, much like stoplights at roadway intersections. Seventeen U.S. airports are scheduled to receive runway status lights by 2017, according to the Federal Aviation Administration (FAA).

Positive train control: Like air travel, train travel is generally safe for passengers as well as freight. However, human factors, such as operator fatigue, substance abuse, distractions or use of medication, can change the safety picture in an instant. Authorities blamed fatigue for a 2011 train accident in Iowa, which killed two crew members. In 2008, an engineer, distracted by a text message, ignored a red light signal, causing a head-on collision near Chatsworth, Calif., that resulted in 25 deaths.

A technology known as positive train control, or PTC, can override operator error at critical points in train travel, such as when entering a station or rounding a dangerous curve. PTC relies on a network of wireless signals including GPS, onboard computers and braking system interfaces to slow or stop a train in case the engineer fails to do so.

The Rail Safety Improvement Act of 2008 requires PTC on all tracks that carry passengers or toxic materials by 2015. Many rail lines, including Metro-North (the operator of the train involved in Sunday's accident), expect to have PTC systems installed within a year or two.

Though PTC is required by 2015, some private and public rail companies have asked for an extension until 2018. Additionally, about 10,000 miles of U.S. railways are completely exempt from the requirement, an exemption the NTSB called "troubling."

Vehicle collision avoidance technologies: About 28 percent of highway accidents are rear-end collisions, according to the National Highway Traffic Safety Administration (NHTSA), and about 23 percent are caused by vehicles running off the road. Technologies that can assist the driver in avoiding or preparing for unexpected road and traffic conditions could, therefore, potentially prevent about half of all accidents.

Other items on the NTSB's most-wanted list include addressing bus operator issues such as driver fatigue; installing fire-detection equipment on commercial vehicles and watercraft; implementing infrastructure improvements on bridges, roads, pipelines and waterways; and eliminating distractions that come from handheld electronic devices such as cellphones.