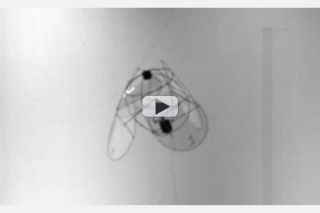 A tiny flapping robot, developed by researchers at New York University, stays aloft by mimicking the pulsating movement of an ocean-dwelling jellyfish. This new method of flight could be used in robots for surveillance, search-and-rescue efforts, or the monitoring of traffic and environmental conditions.

Many flying robots have been modeled after insects, such as fruit flies. But the flapping of a fly's wing is inherently unstable, and the insect must constantly adjust its flight to avoid a gust of wind or a predator. Achieving such kind of complex control in a tiny robot poses a major challenge.

Instead, the NYU researchers designed a prototype robot whose flight resembles how a jellyfish swims— a method that doesn't require any control or feedback to stay stable. The device, presented Nov. 24 at a fluid-dynamics meeting in Pittsburgh, has four wings that look like flower petals, which flap up and down. While the wings' pulsating motions resemble swimming jellyfish, the robot's flight method is actually more similar to a moth's. [See Video of Flying Jellyfish Robot]

The winged bot is 3 inches (8 centimeters) wide and weighs only 0.07 ounces (2 grams). It can ascend, hover or fly in a particular direction, but it can't steer. The robot's size is limited by its weight and power, the researchers found.

The robot is just a proof of principle, and is still far from being a practical robot, study researcher Leif Ristroph, of NYU, said in a statement.

Researchers are working to shrink robots down to a centimeter, so they can fly in small areas or go undetected. The jellyfish bot represents a blueprint for more sophisticated vehicles that have the potential to be miniaturized, Ristroph said.