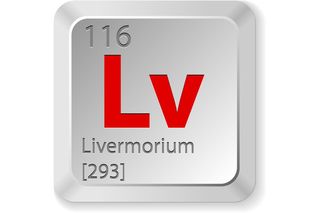 Word origin: Livermorium is named for the Lawrence Livermore National Laboratory in California. The name was officially given by the International Union of Pure and Applied Chemistry on May 31, 2012; prior to that, it was known as ununhexium — one-one-six in Latin.

Discovery: Livermorium was created by scientists at the Joint Institute for Nuclear Research in Dubna, Russia, in 2000. On December 6 of that year, it was jointly announced by the Russian scientists and scientists at the Lawrence Livermore National Laboratory.

Livermorium is a radioactive, artificially produced element about which little is known. It is expected to be a solid and classified as a metal. It is a member of the chalcogen group.

Livermorium has four isotopes with known half-lives, all of which decay through alpha decay. The most stable is 293Lv with a half-life of about 53 milliseconds.

Since only a few atoms of livermorium have ever been made, it has no practical uses outside of scientific study.