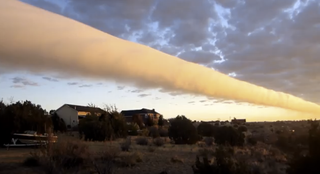 An other-worldly "roll cloud" stretching from horizon to horizon appears to tumble across the Texas sky in a new video.

The cloud video, taken by a couple in Timbercreek Canyon, south of Amarillo, Texas, shows a low, tubular cloud spinning horizontally like an upended tornado. As bizarre as this sight is, it has a meteorological explanation.

These tubelike cloud formations are a type of arcus cloud, a group of low cloud formations. Known as roll clouds, they sometimes form on the edges of thunderstorms. The storm's downdraft pushes cold air from the high atmosphere toward the ground, causing warm, moist air from the surface to climb upward as it is displaced. The moisture from this surface air condenses as it reaches cooler levels in the atmosphere, creating the cloud. Storm winds coax the condensation into a rolling, tubular shape that is often pushed far ahead of the rest of the storm.

Catching a glimpse of a roll cloud is a rare treat, but there is one spot where you can hope to see them regularly: the coast of Queensland, Australia. There, morning winds bring impressive roll clouds nicknamed "Morning Glory" clouds.

Roll clouds have also been recently spotted over the open sea near the coast of Brazil and over the Washington, D.C., area in front of a cold front. A driver in Mississippi caught one on video in 2010, describing it as a "sideways tornado."