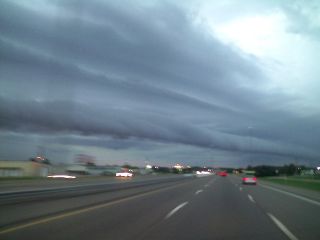 New images of a weird weather phenomenon known as a roll cloud have surfaced from Richland, Miss.

The images, taken on a camera phone by Mississippi resident Daniel Blake Fitzhugh, reveal a seemingly endless roll cloud, or arcus cloud, a low cloud formation that forms over the sea or at the edges of thunderstorms. Fitzhugh sent in an image and video of the cloud to LiveScience after seeing an earlier report of a roll cloud off the coast of Brazil.

Fitzhugh told LiveScience he captured the video and image of a roll cloud in 2010 in Richland, a town on the outskirts of Jackson, Miss.

"It had been cloudy and windy all day," Fitzhugh wrote in an email. "I was heading north and the cloud was going west to east. I noticed it and was extremely surprised! I had never seen anything like it before." [See video of the roll cloud]

The cloud was rolling around like a "sideways tornado," Fitzhugh said. In fact, roll clouds form where sinking cold air drives low-hanging, moist warm air upward, where cooler temperatures condense the moisture in that air to form clouds. Winds create the weird rolling effect. Their more commonly spotted cousin, shelf clouds, form on the leading edges of thunderstorms; while shelf clouds are attached to the bulk of a storm, these tubular clouds aren't.

They are rare, however. One of the best chances to see a roll cloud is off the coast of Queensland, Australia. Here, sea winds regularly form a reoccurring roll cloud known as Morning Glory during the fall months.