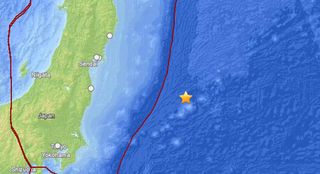 A strong earthquake of preliminary magnitude 7.3 struck off the coast of Japan today, according to the U.S. Geological Survey (USGS).

The temblor prompted the Japan Meteorological Agency to issue a tsunami advisory for the east coast of Fukushima prefecture, forecasting that the sea level could rise up to 3 feet, or 1 meter, though no damage was expected.

On March 11, 2011, a much more powerful magnitude-9 earthquake struck closer to the shore of the same region of northeastern Japan. The so-called Tohoku earthquake unleashed a devastating tsunami and left more than 15,000 dead.

Earthquakes of the size of the one that struck today can cause significant damage, especially with poorly built structures. Even well-designed buildings can be damaged or, in some cases, destroyed depending on the severity of the quake and a building's proximity to the epicenter.

But the damage caused by any single event depends on the quake's depth, proximity to populated areas, building standards in the region, as well as the type of earthquake. The USGS frequently updates the magnitude of an event after more data is analyzed.