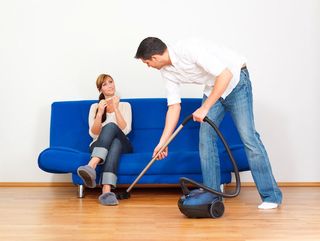 If you think doing household chores will save you a trip to the gym, you might want to think again.

A new study from Northern Ireland finds that people who report housework as part of their weekly exercise tend to be heavier than those who get their exercise through more traditional means.

In fact, the more time people said they spent performing housework as exercise (which they considered moderate to vigorous physical activity), the heavier they tended to be. [Infographic: How Many Calories Am I Burning?]

The findings are counterintuitive, the researchers said, because more physical activity — no matter what the form — should be linked with a lower weight, as long as people keep their calorie intake in check.

The findings suggest that housework "may not be sufficient to provide all of the benefits normally associated with meeting the physical-activity guidelines," the researchers wrote in the Oct. 18 issue of the journal BMC Public Health.

In recent years, public health messages regarding physical activity have shifted from a focus on traditional exercises, such as running, to activities that can be performed as you go about your day, such as cycling to work, or gardening, the researchers said.

However, these messages should instead emphasize the importance of practicing many different kinds of physical activity, and make sure that housework "is not seen as the main method" of exercising, the researchers said.

The study, conducted by researchers at the University of Ulster, analyzed information from more than 4,600 people who were interviewed about their weekly physical activity. Participants were asked to report traditional physical activity, as well as activities they did at home that raised their breathing rate.

About 42 percent of participants met the current physical-activity guidelines (150 minutes of moderate to vigorous activity per week). Of those people, nearly two-thirds said that at least 10 minutes of their weekly activity was spent performing housework.

Richard Cotton, an exercise physiologist and national director of certification at the American College of Sports Medicine, agreed that people need to incorporate a broad range of physical activity into their exercise routine.

However, Cotton said that it would be hard to lose weight just by doing housework. You'll get the most reward for your time if you do more traditional physical activities, he said.

For instance, 30 minutes of vacuuming or sweeping floors burns about 130 calories, while 30 minutes of vigorous cycling on a stationary bike burns 400 calories, according to the Compendium of Physical Activities Tracking Guide, which lists the calories burned during many different types of physical activity.

But some housework does give you a bit of a workout. For instance, 30 minutes of mowing the lawn with a hand mower burns 215 calories, close to what you would burn in 30 minutes of combined jogging and walking.

"The combination [of physical activities] is really ideal," Cotton said.