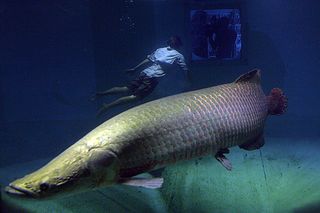 The arapaima (Arapaima gigas), called a pirarucu in Brazil, is one of the largest fish in South America. This fish was photographed in Manuas, Brazil, in 2007.
(Image: © Courtesy Zeb Hogan, National Geographic Society)

Arapaima gigas is the largest — and evolutionarily, one of the oldest — fish species living within the lakes of the Amazon River basin. A team of researchers based at the Lawrence Berkeley National Laboratory interested in determining how this fish evolved to coexist so successfully with the vicious predatory piranha examined A. gigas scales at a higher resolution than any past examination had. They found that each individual scale contains stacked spiral staircaselike layers of proteins that rotate inward and outward to absorb or repel the force of a piranha bite. [Biodiversity Abounds: Stunning Photos of the Amazon]

The spiral staircaselike structures within each scale provide the last line of defense in what the team considers a hierarchy of defenses that range from macroscopic to microscopic scales. For a first line of defense, the fish scales each overlap by about 60 percent, which provide a double layer of protection across the majority of the fish's body. A piranha tooth can easily penetrate the thickness of one scale, but not the thickness of two, the researchers said.

Zooming deeper into the scales, each has a protective hard outer shell that is about 0.5 millimeters thick — about the thickness of a human hair — and a softer inner core that is about 1 mm thick. This inner core is made of collagen, a protein found in human skin, and provides a degree of elasticity lacking to the brittle outer shell.

Finally, each soft inner core consists of multiple spiral staircaselike structures that rotate inward and outward in response to the force of a bite.

"The beauty of the structure is when you apply a load in a certain direction, the spiral stairs have the ability to rotate, and can modify the loads you have applied to the entire sample to withstand the loads," said study co-author Bernd Gludovatz, a postdoctoral researcher at the Lawrence Berkeley National Laboratory.

The team applied forces similar to that of a piranha bite to sample A. gigas scales, and observed the response of microscopic collagen layers using a technique called small-angle X-ray scattering (SAXS).

Though this is the first time the distinct structural mechanism has been found in fish scales, other fish may have similar structures but have not yet been studied at such a high resolution, Gludovatz said.

Aside from explaining the biological mystery of how one fish evolved to coexist with a vicious predator, the new findings may also inform bio-inspired material design, such as innovations in military armor.

"What we want to do is learn from nature how materials evolve to be the most efficient for different individual applications," Gludovatz said. "We want to understand how nature develops these materials, and then try to copy them and make something similar and, if possible, get the mechanical properties maybe even better and more efficient."

The team has also begun studying the elastic properties of chicken and rabbit skin to better understand the microscopic properties responsible for skin elasticity.

The new findings are detailed today (Oct. 15) in the journal Nature Communications.