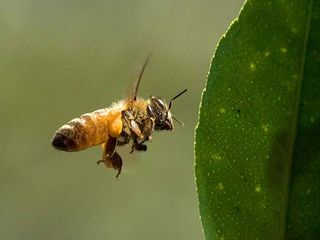 A bee in flight, landing gear down.
(Image: © PDPhoto.org)

Unlike landing gears that are retracted during a jet's flight, some bees leave them down as they buzz along.

"The hind legs resemble airplane wings, which probably explains why they also generate lift," said Stacey Combes of the University of California, Berkeley.

It was just earlier this year that other researchers figure out how bees fly. In order to examine their flight mechanism more closely, Combes and colleagues encouraged the bees to fly in an outdoor wind tunnel by enticing them with aromatic oils.

They found that as speeds got higher, the bees extended their hind legs to maintain a stable position. But at the highest speeds, even those with fully extended legs reached their limit and lost their balance. This instability came from the rolling force on their legs.

"They roll all the way to the side or often upside down, and crash to the ground," Combes said.

Bee speed is limited not by muscle power or how high they can flap their wings, but on how they balance themselves during unstable conditions, the researchers found.

The dangling legs help them keep their balance, similar to when a spinning figure skater extends her arms, Combes explained.

Understanding the mechanism of bee flight could help engineers design small flying machines for search and rescue missions or surveillance.

The study was presented last week at the Annual Meeting for the Society for Experimental Biology.