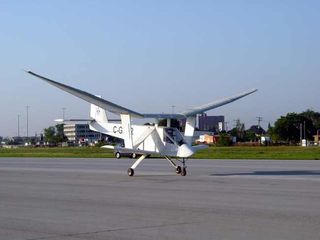 The Flapper -- a manned ornithopter developed at the University of Toronto's Institute for Aerospace Studies.
(Image: © James DeLaurier.)

The history of manned flight often begins with the 15th Century drawings by Leonardo da Vinci. He envisioned a machine with flapping wings powered by the human body.

Da Vinci's ornithopter, as it was called, was not built in his lifetime. Ornithopters have been a bit of a technological dead-end. There have been many failed attempts to mimic the flight of birds.

Now a group led by James DeLaurier at the University of Toronto is trying to make this 500-year-old dream a reality.

'For the beauty of it'

Sir George Cayley realized in 1799 that lift - what gets a flying machine into the air, could be separated from thrust - what moves it forward. This freed designers to eventually create successful fixed-wing aircraft, in which the thrust creates airflow over a wing, generating lift.

For an ornithopter, as with a bird, the flapping motion has to generate both lift and thrust. There are some advantages to a flapping-wing over a fixed-wing for small aircraft, but DeLaurier does not think the same is true for a human carrier. So why try to build a manned ornithopter?

Smaller, remote-controlled ornithopters have been successfully flown. Even toy makers have figured out how to make a flapping, flying plastic bird.

DeLaurier and his team of young researchers have a full-scale ornithopter, they affectionately call the Flapper, that they hope will be the first to take a human into the sky. Testing on the runway began in 1996, but there have been several setbacks, including problems with the drive train and excessive bouncing when the wings flapped.

"There are no handbooks on ornithopter design," he said. "We've had to learn as we go."

The Flapper has a 41-foot wingspan and weighs 780 pounds with pilot and fuel. With its gas-powered engine pumping the wings up and down, the craft has accelerated to 50 mph on the ground. It has made brief hops into the air for two to three seconds but has not yet achieved sustained flight.

The design of the Flapper is far-removed from da Vinci's drawings. But DeLaurier credits the Italian inventor for basing the first ornithopter on the physiology, not of a bird, but a bat - with a membrane stretched tightly over a skeletal structure.

"It puts the lie to the notion that feathers are necessary for flight," DeLaurier said.

Although the researchers have studied Canada geese in a wind tunnel, the Flapper is not based on any particular animal. "A lot of things in nature don't apply to an ornithopter," DeLaurier explained. "We don't have to lay eggs, or jump out of a tree, or fold our wings and tuck them in - like a bird does."

The Flapper's wings look like a conventional aircraft's, but they have to withstand much greater stresses. The wings' composite material is made of carbon fiber and Kevlar - the stuff in bulletproof vests. DeLaurier said a manned ornithopter was impossible until these strong, lightweight materials became available.

Overall, though, the biggest challenge to a flying Flapper has been money.

"If we were funded like a NASA program we would have been off the ground a long time ago," DeLaurier said.

He has relied mostly on private donations and money from his own pocket. His wife told him the next ornithopter he designs cannot be bigger than his workbench, and DeLaurier seems willing to agree.

The Flapper is ready for its next trial. "The aircraft is good to go," DeLaurier said, but the Canadian winter has set upon the team. Not wishing to test his luck, DeLaurier said the Flapper will remain in the Toronto Aerospace Museum until late April. "Then we'll see what Murphy has in store for us."