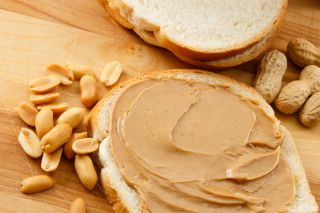 Diagnosing Alzheimer's disease in its early stages has always been challenging — there is no single test that can accurately determine whether a person has Alzheimer's or some other form of dementia.

But researchers at the University of Florida's McKnight Brain Institute Center for Smell and Taste believe they may have discovered a simple test that could be used to make a diagnosis of early-stage Alzheimer's disease — and it involves peanut butter.

The front part of the temporal lobe is one of the first areas of the brain to degenerate in people who have Alzheimer's. That region of the brain is involved in processing smells and forming new memories, and those two skills are among the first to be affected in cases of cognitive decline such as Alzheimer's disease. [Top 10 Mysterious Diseases]

So Jennifer Stamps, a graduate student at the University of Florida, devised a simple way of testing the smell acuity of patients. Her test is based on the fact that people with Alzheimer's often have more degeneration on the left side of their brain, according to the researchers' report, published in the Journal of the Neurological Sciences.

Stamps asked people visiting the McKnight clinic to close their eyes and block one nostril, and to tell her when they could smell a small cup of peanut butter; the test was then repeated on the opposite side of the nose with that nostril blocked. She used an ordinary ruler to determine how far away the peanut butter was from each nostril when it could be smelled.

The results were dramatic: In those patients who were later diagnosed with Alzheimer's, the left nostril — which is linked to the left side of the brain — was much less sensitive to the peanut butter smell than the right nostril. On average, the peanut butter needed to be 3.9 inches (10 centimeters) closer to the left nostril before it could be smelled, suggesting some degree of degeneration in the brain's left hemisphere.

"At the moment, we can use this test to confirm diagnosis," Stamps said in a statement. "But we plan to study patients with mild cognitive impairment to see if this test might be used to predict which patients are going to get Alzheimer's disease."

In addition to a physical exam to rule out other causes of the symptoms of dementia (such as anemia, medication or mental illness such as depression), doctors currently give a patient a battery of cognitive tests designed to find any signs of dementia or Alzheimer's. They may also use an MRI or CT scan to rule out other conditions, such as tumors or strokes, that can cause cognitive or behavioral problems.

The peanut butter test might be useful for those clinics that don't have the equipment or personnel to perform these or other, more elaborate tests for Alzheimer's. "We see people with all kinds of memory disorders," Dr. Kenneth M. Heilman, professor of neurology at the University of Florida and co-author of the study, said in the statement. "This can become an important part of the evaluation process."