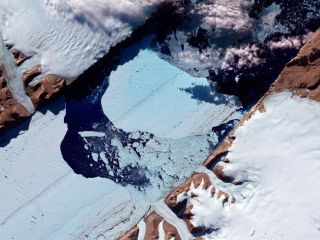 In July 2012, a massive ice island broke free of the Petermann Glacier in northwestern Greenland. On July 21, 2012, the Advanced Spaceborne Thermal Emission and Reflection Radiometer (ASTER) on NASA’s Terra satellite captured this image of the iceberg’s continuing journey. This image has been rotated and north is toward the right.
(Image: © NASA)

The latest landmark climate change report from the Intergovernmental Panel on Climate Change was released today (Sept. 27), and it states the most certainty to date of humanity's role in causing global warming and climate change.

What makes this report stand out from the last four is that IPCC has presented climate mitigation scenarios. Want to hold global warming below 3.6 degrees Fahrenheit (2 degrees Celsius) and stop Greenland from melting? The IPCC report recommends a greenhouse gas emissions cutoff.

The IPCC report said that to keep global warming below 3.6 F, global carbon emissions would have to remain below 1,000 billion tons. This carbon "budget" accounts for the 500 billion tons that were released by 2011, so the lowest emissions scenarios have carbon output peak around 2020 and decline soon after.

"We have a choice," said Gerald Meehl, a report author and senior scientist at the National Center for Atmospheric Research in Boulder, Colo. "When you look at these different scenarios, for example, when you see a nearly ice-free Arctic in summer by mid-century, we can choose a different future. We can choose what future we have by the choices we make right now."

Better insights into ice sheet melting, gained through polar research campaigns, have greatly improved sea level rise estimates, Talley said. Scientists also know more about how the ocean stores heat. While land-dwelling humans may focus on rising air temperatures, 93 percent of the added heat in the past century from global warming has come in the form of warmer ocean waters, the IPCC reported.

The report is virtually certain (99 to 100 percent confidence) the ocean waters will continue their crawl into coastlines during this century.

By 2100, sea levels are likely to rise by between 10 and 32 inches (26 to 82 centimeters) from a combination of melting glaciers and ice sheets, and warming ocean water, which expands when heated. In 2007, the IPCC projected 7 to 23 inches (18 to 59 cm) of sea level rise for a similar greenhouse gas emissions scenario.

"I am really pleased that the sea level projections are more complete," said David Vaughan, a report author and climate scientist with the British Antarctic Survey. "We're really honing in on the amounts of sea level rise we're going to get."

But it is still unclear where exactly that water will go. "Not everybody is going to see sea level rise in the same way. Some will see more than others," Vaughan told LiveScience.

Climate models suggest rainfall patterns will change by 2100, with wet regions getting wetter and dry regions getting drier. There will be regional variations, of course, but some places could get up to 50 percent more precipitation, the new report said.

The shift is already taking place: Scientists have reported the ocean's surface waters are getting less salty in spots where rain is increasing, and more salty where the climate is drier. Rainfall changes were only lightly touched on in the  2007 report.

Thirty percent of the excess carbon dioxide added to the atmosphere ends up in the ocean, where it forms carbonic acid. The increased acidity in ocean water is eating away at coral reefs and making it harder for oysters to build shells.

"The pH has decreased by about 0.1 by about since the beginning of the Industrial Age," Johnson told LiveScience. "This corresponds to a 26 percent increase in acidity. We don't assess the impacts, just the changes, but I think it will be an important part and something people are going to talk about," Johnson said.

The report predicts that Earth's surface temperatures will likely rise (66 percent confidence) by 2.7 to 8.1 F (1.5 to 4.5 C) if carbon dioxide concentrations in the atmosphere double. Though the lower end of this range falls below the riseestimated in the 2007 report (3.6 F, or 2.0 C), the new range is the same as in IPCC reports issued before 2007.

Separately, the report projects that global average temperatures will rise between 0.5 to 8.6 F (0.3 to 4.8 C) this century, depending on different carbon emission scenarios.

The IPCC report has also shifted from talking about carbon emissions in parts-per-million, which counts one molecule of carbon dioxide in one million molecules of air, to the more easy-to-understand tons. [Infographic: Climate Change Evidence: 'Unprecedented' Warming Is Man-Made]

In the past 15 years, surface temperatures have increased more slowly than in the 1970s and 1980s. (However, the upper ocean continues to warm by 0.2  F (0.1 C) every decade, and the speed at which the ice sheets are melting shot up in the past 10 years).

The IPCC concludes that the short-term trend is caused by natural climate variability, with some of the heat that would go into surface warming instead being stored in the deep ocean instead, and by short-term cooling caused by volcanic eruptions, along with a solar minimum that decreased the amount of the sun's radiation hitting Earth.

"Even though we have this global pause, sea level is continuing to rise," said Graeme Stephens, a report author and climate scientist at the Jet Propulsion Laboratory in Pasadena, Calif. "So we think the heat is going into deep oceans, but we're not 100 percent sure."

This time around, the IPCC report is 5 percent more confident (95 percent) that humans have “been the dominant cause of the observed warming since the mid-20th century.” That's an increase from 90 percent certainty in 2007.

"Warming is unequivocal," Dennis Hartmann, a report author and climate scientist at the University of Washington, said during a news conference following the report's release.