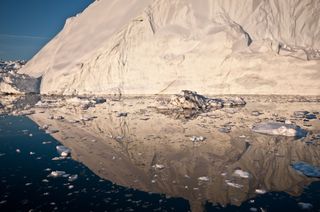 Rising sea level is among the most potentially catastrophic effects of human-caused climate change. Increases in sea level strengthen the destructive power of storms, and threaten to swamp major coastal cities, as well as small-island and low-lying nations. In the United States alone, more than 8 million people live in areas at risk of coastal flooding.

During the 20th century, global sea levels crept up by about 6.7 inches (17 centimeters), and the rate of increase appears to have accelerated since the 19th century.

This century, scientists expect to see sea levels continuing to rise as more warming causes water to expand and melts ice that flows into the ocean. But just how high sea levels will go in the next 87 years is a wide open question. A soon-to-be released report won't have definitive answers, but it is expected to offer a range of projections drawn from current research.

On Friday, Sept. 27, the Intergovernmental Panel on Climate Change (IPCC) is scheduled to release a summary of the physical sciences section of its Assessment Report 5. The numbers in the IPCC’s assessment reports serve as a reference point for decision makers and for the general understanding of climate change.

Six years ago, an earlier version of the IPCC's report estimated average sea levels could rise by somewhere between 7 inches (18 centimeters) and 1.9 feet (0.59 meters) by 2100. But scientists lacked key information when they put this report together, and work done since indicates that end-of-the-century sea levels could be higher.

"The key point about those projections is they included only part of the story,” Chris Little, an associate research scholar at Princeton University, said of the sea level projections in 2007. Namely, the authors could not fully consider potential contributions from ice sheets covering Greenland and Antarctica.

Scientists know that these ice sheets could give a large boost to sea levels because of the sheer amount of water locked up in them. These massive layers of ice take up water from the oceans through snowfall (water evaporates from the oceans and turns to precipitation in the atmosphere) and return it through melt, but scientists didn’t understand aspects of this process well enough to fully account for how climate change might affect it.

In recent years, understanding of ice sheets’ potential contribution has improved, to some degree.

"I think we understand it much more," said David Vaughan, coordinator of the European Union-funded Ice2sea program. Though he added, "We don't understand it to my satisfaction "

Work by Ice2sea has pushed projections higher than those contained in the IPCC's 2007 report, with the highest plausible projection at a little over 1 meter (3.3 feet), Vaughan said. [8 Ways Global Warming is Already Changing the World]

"It is truly an ongoing process," Little said. "The information is going to continue to get better over time."

Controversy at the high end

The IPCC projectionshave relied on scientists' understanding of physical processes that contribute to sea level change. Another type of model has yielded higher future sea level projections, topping out at 2 m (6.6 feet). These semi-empirical models rely heavily on the historical relationship between changes in temperatureand sea level to look into the future.

"The big argument in the scientific community is, 'How much is this going to look like past events?" because this really is different," said Josh Willis, a climate scientist at NASA’s Jet Propulsion Laboratory in Pasadena, Calif. "We are dumping carbon dioxide into the atmosphere faster than anything done in millions of years, and the temperature is changing really rapidly."

What’s more, after the peak of the last ice age, much more ice was available to melt and raise sea levels than at present, he said.

But the other alternative, physics-based models, still don't account for all of the processes that can influence changing sea levels, potentially underestimating the impact. "So we are stuck between a rock and a hard place," Willis said.

"The 2 meters by 2100 is cited a lot, but if you ask scientists what they think of that number, they say it is probably a little high, maybe 1.5 meters [4.9 feet] is more like an upper bound," Willis said.