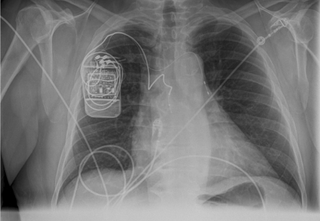 A new medical implant could help treat people with sleep apnea, a disorder that causes breathing to stop abnormally during sleep, researchers say.

Patients with sleep apnea can experience pauses in breathing that can last at least 10 seconds, and sometimes minutes. These pauses may occur 30 or more times an hour while patients are asleep, and the condition can worsen heart disease.

In the new research, scientists focused on people with central sleep apnea. "Central sleep apnea affects more than a third of heart failure patients, and is known to make the condition worse," researcher Dr. William Abraham, director of the division of cardiovascular medicine at Ohio State University's Wexner Medical Center, said in a statement.

Compared with the more common condition obstructive sleep apnea, in which a person's airway gets blocked during sleep, central sleep apnea is more dangerous because the signals the brain uses to tell the body to breathe get interrupted.

"One of the concerning features of central sleep apnea is that these patients don't fit the usual profile of obstructive sleep apnea," researcher Dr. Rami Khayat, a sleep medicine expert and director of Ohio State University's sleep heart program, said in a statement. "They generally don't snore, so they're tougher to diagnose, and the symptoms of sleepiness and fatigue overlap with symptoms associated with heart failure." [5 Things You Must Know About Sleep]

Moreover, "there haven't been especially good treatments available for this type of apnea until now," Abraham said. "Currently, therapies include masks that fit over patients' faces as they sleep and blow air at them, and these are often poorly tolerated by patients, or ineffective."

Now, researchers are testing a small implant that operates much like a pacemaker to help treat central sleep apnea.

"We're excited by the device, the results of our study and the potential to help a lot of patients," Abraham told LiveScience.

The device is implanted below the collarbone. A wire from the device then is then threaded into a vein, where it rests near one of the body's two phrenic nerves, which normally carry signals from the brain to the diaphragm, the muscle below the lungs that drives breathing.

"Implanting a device is much like implanting a pacemaker — it's a relatively straightforward procedure any electrophysiologist can easily learn to do," Abraham said.

The device generates an electric pulse and uses the wire to stimulate a phrenic nerve and, in turn, the diaphragm.

"The beauty of the device is that it's fully automatic — once it's implanted, it doesn't require patient intervention," Abraham said.

Abraham and other cardiovascular researchers at 11 centers around the world tested the feasibility, safety and efficacy of the new implant made by Respicardia, a medical device company based in Minnetonka, Minn. Abraham is a paid consultant for the company.

In the pilot study, 47 patients were implanted with the device and evaluated for six months. The device was turned on after a one-month healing period following implantation, and programmed to the patient's sleep habits.

The device helped cut the number of pauses in breathing during sleep per hour by more than half. The researchers ultimately saw a nearly 90 percent reduction in central sleep apnea.

"It works automatically to regularize breathing patterns and avoid episodes of apnea," Abraham said. "Patients slept better, and 76 percent of them reported a mild, moderately or markedly improvement in quality of life." A reduction in blood pressure was also seen in patients with hypertension.

The device is not without risks. Just like a pacemaker, the device's stimulator wire can occasionally get dislodged, requiring a follow-up procedure to reposition it, or the device or its stimulator wire can get infected, necessitating its removal. "However, overall, the benefits compared to risks seem very appealing," Abraham said.

The researchers have now started a larger randomized, controlled clinical trial with the device. They plan to enroll 150 patients at up to 25 centers. Once volunteers receive the implant, half will have the device turned on soon after surgery, while the control group will wait six months to have their device turned on. Patients will be followed up to five years.

"We hope to get definitive results that will lead this therapy to being made available to a much broader group of patients," Abraham said.

Abraham and his colleagues presented their findings today (Sept. 23) at the Heart Failure Society of America's annual scientific meeting in Orlando.