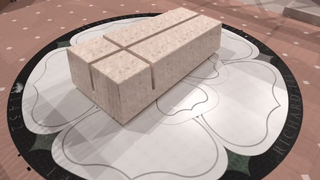 An artist's conception of the tomb that will be built for King Richard III in Leicester Cathedral.
(Image: © Van Heyningen and Haward)

British officials have revealed their plans for a regal reburial of King Richard III, whose body was discovered in a hastily-dug medieval grave under a parking lot in Leicester, England, last summer.

The Leicester Cathedral is seeking approval for a £1.3 million ($2 million) proposal to build a tomb and renovate the church to make it fit for a king. But a legal battle lingers over whether Richard should even be buried in the city of Leicester at all.

Cathedral officials hope to put Richard III to rest in a raised limestone coffin with a deeply carved cross, placed squarely over a large white rose (the heraldic symbol of the House of York) carved into the floor. A band of dark Kilkenny limestone will circle the rose, Cathedral officials said, and it will be inscribed with the name of the medieval king, the dates of his birth and death (1452-1485) his personal motto, "Loyaulte me Lie" (Loyalty binds me) and his "boar" badge. [Gallery: The Search for Richard III's Grave]

Richard III was the last king of the House of York. He ruled from 1483 until 1485, when he was killed by the rival forces of Henry Tudor at the Battle of Bosworth Field, the definitive fight that ended the War of Roses.

The king was buried without much ceremony at Grey Friars monastery in Leicester, which was later demolished and obscured by development, leaving King Richard III's remains long-lost to history. Last year, a group of archaeologists from the University of Leicester uncovered the ruins of Grey Friars, along with the king's skeleton, later confirmed through a DNA test.

Before any digging at the site began, British officials and excavators had planned to rebury Richard, if found, in Leicester Cathedral.

The Cathedrals Fabric Commission for England must review Leicester Cathedral's plans for the tomb and will decide whether to approve the proposal by late October.

Meanwhile, a judge is still reviewing a challenge to Leicester's claim on Richard's remains.

A group called the Plantagenet Alliance, made up of people who claim to be distant relatives of the dead king, says Richard's body belongs in York, a city where the monarch spent about a third of his life. The group has challenged the University of Leicester's exhumation certificate, basing their argument on alleged human rights violations. They were granted a judicial review.

"We fully respect the process of the Judicial Review, which will ensure the procedure leading to the reinterment is correct," Dean of Leicester David Monteith said in a statement. "While this takes its course we must, as would any Cathedral in this position, seek planning permission for the detailed and costly changes which need to be made to the building."

"The overall concept is regal and respectful in its elegant simplicity, as befits the final resting place of a King of England," Monteith said. "By placing the tomb in our Chancel, we are giving King Richard the same honor as did those friars more than 500 years ago."

The firm of Van Heyningen and Haward, Architects created the designs for the tomb and interior renovations. The plan has garnered praise from the Richard III Society, whose chair, Phil Stone, called the design "utterly inspired."

Rev. Canon Mandy Ford, who led a group overseeing the design, also said in a statement: "The architects have responded to our desire for a monument which speaks of the great Christian themes of life, death and resurrection, while marking the resting place of one individual."