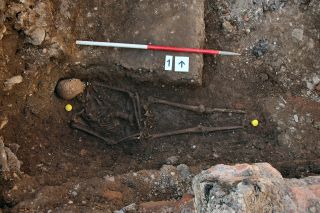 The debate over the reburial of English King Richard III is heating up, with a group of the monarch's supposed descendents challenging the University of Leicester on the plans for reinterment, basing their argument on human rights violations.

University of Leicester archaeologists discovered the bones of the lost monarch under a parking lot in Leicester last year, and they confirmed the king's identity in February. The U.K. Ministry of Justice issued the university an exhumation certificate before the project began, giving them the right to decide where the king's remains would be reburied, if found. That certificate hasn't stopped the eruption of debate over the best spot for the burial.

From the beginning of the long search for Richard's grave, the Univeresity of Leicester officials have stated that the king would be reburied in Leicester Cathedral, not far from his unmarked parking lot grave. But a number of Richard III enthusiasts say they'd rather see the king buried in York, a city where he spent about a third of his life.

Now, the Plantagenet Alliance, a group of about 15 people who claim to be relatives of the dead king, has released its intentions to file a legal challenge against the University of Leicester's exhumation certificate. The challenge will argue that the Ministry of Justice is in violation of article 8 of the European Convention of Human Rights, which affirms the right to respect for family and home life. [Gallery: The Discovery of Richard III]

According to the Alliance, the Ministry of Justice should have consulted the 15 relatives of Richard III before issuing the university a license to rebury the king as they wished. In a statement, the University of Leicester called this argument "particularly odd."

"There is no obligation to consult living relatives where remains are older than 100 years," the University of Leicester said.

In addition, Richard died without offspring. Any relatives are thus the descendents of his siblings, a relatively distant tie.

"Statistically speaking, many tens of thousands of individuals alive today are descended this way," the university officials said.

Although he died in 1485, Richard III has many fans today. There are several societies for "Richardians," as enthusiasts are known. Most Richardians are history buffs drawn by the mystery surrounding the king — was he really a villain as portrayed in Shakepeare's "Richard III?" Did he have his nephews murdered to ascend to the throne, as rumored after his reign? Or was the king, the last of the Plantagenet dynasty, simply smeared by the Tudor dynasty that came after him?

University archaeologists argue that plans for a Leicester reburial have been transparent and in place since before the dig started.

"Reinterment on the nearest consecrated ground is in keeping with good archaeological practice," university officials stated. "Richard has lain in the shadow of St. Martin's Cathedral, Leicester, for over 500 years."