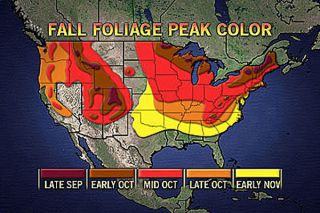 As summer comes to a close, signs of fall are prematurely visible in leaves across the mid-Atlantic, the area most likely to receive a vibrant display of foliage this year.

Cold air and a dry August have prompted an early emergence of colors for parts of the area, including Pennsylvania, New York and New Jersey. Meanwhile, surrounding regions may be hindered by flooding rain and unseasonable temperatures.

"Most important is really what happens at the end of September and beginning of October into the middle of October. That's really the crucial period," according to Dr. Marc Abrams, professor of Forest Ecology and Physiology at Penn State University.

Meanwhile, those farther north may be somewhat disappointed. The Northeast is forecast to remain warmer than normal this fall.

Through September and October, temperatures will average 2 to 3 degrees above normal in upstate New York and New England, Lead Long-Range Forecaster for AccuWeather.com Paul Pastelok said.

Cold isn't anticipated to return until some time in November.

The result will be poor canopy color intensity for northern New England, according to Associate Research Professor for Physical Ecology at the University of Maine Michael Day.

"The warmer, wetter early autumns that have become typical in the northeastern U.S. in recent years have resulted in diminished foliar displays," Day said.

Cold temperatures will not be in short supply for the Midwest, where an early frost/freeze is forecast in October.

A hard freeze while leaves are still green will transition the leaf straight to brown, rather than allowing multiple colors to come out. It may also delay the peak of the season, Abrams said.

A frost, on the other hand, could be beneficial for the region.

"A frost helps to bring out the color. What happens is that the chlorophyll - which causes the green color of leaves - starts to break down. This basically exposes the other pigments like red and orange," Abrams said.

Leaves in the Southeast will struggle to change color this year, as the region continues to be hammered by flooding rain into the fall.

A deluge will help the leaves stay green. A mild drought in late September and early October would have been more conducive, helping to move the the leaves into senescence, Abrams said.

Much of the western half of the nation continues to be gripped by moderate to exceptional drought, particularly along the Rocky Mountains, the primary color-producing area of the West.