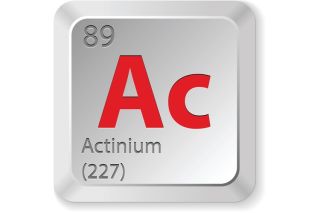 Word origin: The word actinium comes from the Greek aktis or aktinos, which means beam or ray.

Discovery: Actinium has two independent discoverers: Andre Debierne, who found it in 1899, and F. Giesel, who discovered it in 1902.

Actinium is the first of the actinide series of elements. The chemical behavior of actinium is similar to rare earths, especially lanthanum. Actinium is about 150 times as active as radium. [See Periodic Table of the Elements]

Actinium has 36 isotopes, none of which are stable. Actinium occurs as isotope 227Ac in uranium decay.

Isotope 227Ac occurs naturally through the decay of uranium minerals. Actinium metal can been prepared by reducing actinium fluoride with lithium vapor at about 1,100 to 1,300 degrees C (2,012 to 2,372 F).

Actinium’s high activity level makes it valuable in producing neutrons. There has been some work done to use 225Ac in treating cancer patients.