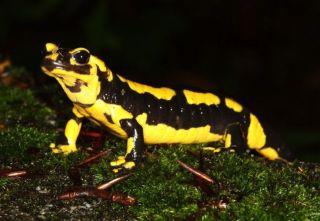 A newly discovered fungus that feasts on the skin of amphibians is threatening to decimate a species of salamander in the Netherlands, according to new research.

Fire salamanders are one of the most recognizable salamander species in Europe, and are characterized by their distinct yellow- and black-patterned skin. Since 2010, fire salamanders have been mysteriously dying off in the forests of the Netherlands.

Now, scientists have identified a deadly fungus, called Batrachochytrium salamandrivorans (the second part of the name translates to "salamander-eating"), that they say is jeopardizing biodiversity and bringing fire salamanders close to the brink of regional extinction. [Photos: Bizarre Frogs, Lizards and Salamanders]

Previously, a fungus species related to the salamander-eating variety was the culprit behind mass amphibian casualties around the globe. That fungus, named Batrachochytrium dendrobatidis, or Bd, is thought to have devastated more than 200 amphibian species worldwide, the researchers said. The fungus Bd also causes the disease chytridiomycosis, which has been labeled the most devastating infectious disease in vertebrate animals by the International Union for the Conservation of Nature.

The detection of a new fungus that rapidly kills fire salamanders is an alarming development, said An Martel, a professor in the department of pathology, bacteriology and poultry diseases at the Ghent University in Belgium, and lead author of the new study.

"In several regions, including northern Europe, amphibians appeared to be able to co-exist with Bd," Martel said in a statement. "It is, therefore, extremely worrying that a new fungus has emerged that causes mass mortalities in regions where amphibian populations were previously healthy."

The fungus can be spread between salamanders through direct contact, and although the researchers suspect it can also spread through indirect contact, they have yet to prove this type of transmission. The fungus typically invades the salamander's skin, quickly killing the animal, the scientists said.

Still, much is unknown about the newly identified fungus. Tests to infect midwife toads, which have been threatened by chytridiomycosis, have shown that these toads are not susceptible to the salamander-eating fungus. Nonetheless, the vulnerability of other species of amphibians to the disease is not yet known.

"It is a complete mystery why we are seeing this outbreak now, and one explanation is that the new salamander-killing fungus has invaded the Netherlands from elsewhere in the world," study co-author Matthew Fisher, a professor of fungal disease epidemiology at Imperial College London, said in a statement. "We need to know if this is the case, why it is so virulent, and what its impact on amphibian communities will be on a local and global scale."

By figuring out which species are at risk, scientists may be able to take steps to protect vulnerable populations in the wild, he added.

"Our experience with Bd has shown that fungal diseases can spread between amphibian populations across the world very quickly," Fisher said. "We need to act urgently to determine what populations are in danger and how best to protect them."

The study findings were detailed Sept. 2 in the journal Proceedings of the National Academy of Sciences.