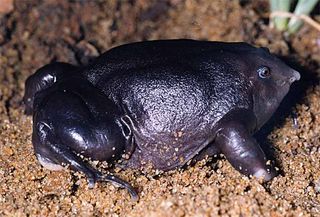 The purple frog is a burrowing species that spends most of the year up to 13 feet (four meters) underground feeding on termites.
(Image: © Sathyabhama Das Biju, ZSL)

Blind salamanders, legless amphibians with tentacles on their heads and ghost frogs whose favorite haunt is a human burial ground are just a few of the world's weirdest and most endangered creatures.

The Zoological Society of London announced this week these are among the 10 most unusual and threatened amphibian species, as part of the EDGE Amphibians conservation and fundraising initiative. Amphibians that made the list are deemed by the society to be the most evolutionarily distinct and globally endangered, aka EDGE species. They have few close relatives in the tree of life and are genetically unique, along with being on the verge of extinction.

"These animals may not be cute and cuddly, but hopefully their weird looks and bizarre behaviors will inspire people to support their conservation," said Helen Meredith, EDGE Amphibians conservationist in England.

Species that are evolutionarily distinct are one of a kind, said Arne Mooers of Simon Fraser University in Canada.

"We can't afford to lose these ones, because they are so different from everything else," said Mooers, who works with scientists as part of the EDGE of Existence program. "If we lose these, then we lose a big chunk of the total variation," he said, referring to overall biodiversity.

The alien-looking amphibians come in all sizes, from the Chinese giant salamander to the Gardiner's Seychelles frog that's smaller than a thumb nail, and in all colors, including the Malagasy rainbow frog and the pale Olm salamander that dwells in limestone caves.

The Chinese giant salamander, with a nose-to-rump length of up to nearly six feet (1.8 meters), tops the list as the highest conservation priority, Meredith said. One threat has been hunting. Locals and others use hooks to capture the burrowing salamanders for their skin, considered a delicacy by some.

Another chart-topper is the purple frog, Nasikabatrachus sahyadrensis. The purple-pigmented frog wasn't discovered until 2003, because it stays hidden beneath about 13 feet (four meters) of earth for most of the year, feeding on termites.

Some peculiar parents on the top-10 list include the Betic midwife toad and the Chile Darwin's frog, both of which rely on the male as caretaker. For instance, the male Darwin's frog keeps the babies safe by swallowing them.

"When the tadpoles are developing enough and wriggling in the egg, the male gulps them down into his vocal sac," Meredith told LiveScience.

Not only do these odd amphibians need protection, but they could shed light on the broader extent of environmental degradation. Some scientists refer to amphibians as canaries in the coal mine for the state of the environment.

"There are lots of things that make amphibians brilliant indicator species," Meredith said. "They are often found in quite small ranges and they don't have the ability to migrate long distances, most of them."

If their patch of land becomes degraded in some way, the amphibians can't really go anywhere else, Meredith explained, so they just stay put and die. "If the amphibian communities are dying, it's basically saying that place right there is no longer a healthy environment," she said.

Amphibians also have very sensitive skin, so toxins in the environment readily take a toll on them. "A lot of them breathe through their skin, sometimes to the exclusion of even using their lungs," Meredith said.

A group of salamander species living in southern Mexico, which took the number-6 spot on the list, isn't even equipped with lungs. Instead these salamanders breathe through their skin and mouth lining.