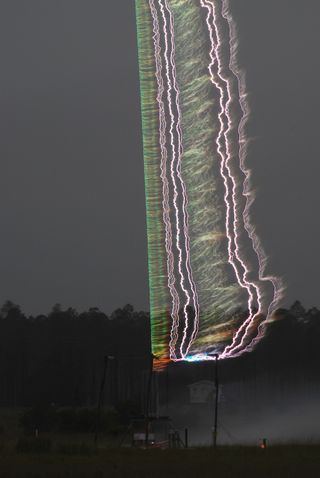 A triggered lightning experiment conducted in Florida as part of an ongoing research effort to better understand how lightning forms. The blue-green light in the image is from copper in the initial triggering wire being heated to the point of radiating light. Bright white strokes of lightning off to the side were displaced by wind blowing between strokes.
(Image: © Doug Jordan and Martin Uman/International Center for Lightning Research and Testing)

Amid Florida's steamy and stormy summer, a group of researchers conducted something of a modern-day version of Benjamin Franklin's legendary lightning-kite experiment, only instead of tying a metal key to a kite, these scientists have weather balloons that they send into thunderclouds in order to learn more about how, when and where lightning forms.

And these scientists are perhaps a bit more averse to the potential for self-injury than Franklin, who succeeded in shocking himself once while experimenting with electricity in his home laboratory, according to The Franklin Institute. Today's researchers know a bit more about the dangers of lightning, which is one of the reasons they want to know more about it.

"The dangers are real, and we have a healthy respect for them," Don MacGorman, a physicist at the National Oceanic and Atmospheric Administration's (NOAA) National Severe Storms Laboratory (NSSL) who participated in the balloon launches, told LiveScience. "But we also know quite a bit about how storms produce hazards and so minimize our exposure to the more hazardous situations and locations. As a result, we think our risk from storms we are studying is less than our risk from vehicle mishaps as we navigate around storms, particularly if there are many people watching a given storm." [Electric Earth: Stunning Images of Lightning]

The aim of the ongoing experiment, run by the University of Florida and conducted in early August this year, was to better understand how lightning is formed, where and under what circumstances it occurs in storms, and how to use that information with the data on lightning occurrence available to forecasters to improve forecasts of severe weather.

For one experiment, "we wait until the ground reaches a certain [electrical potential] value, when the conditions are more conducive to lightning, and then we launch this very long wire that enhances the electric forces in the region of the wire," MacGorman said. (Cloud-to-ground lightning results from a separation in charge that forms between the two.)

"That can cause a lightning flash to be initiated by the wire and to strike ground at the bottom of the wire, which is surrounded by a lot of special cameras and instruments. Then we get information about the magnitude and duration of the electric current in the lightning channel, and about all the kinds of radiation that the lightning produces."

This triggered lightning experiment gathers data on lightning currents and flashes to improve understanding of the basic physics of lightning. The data is also used by engineers in designing lightning protection for people, power lines and other structures. (Franklin's own investigations of electricity and lightning led him to create a version of the lightning rod.)

In the last three years, the lightning study has expanded, with funding from the Defense Advanced Research Projects Agency (DARPA) to install a system that maps the development and 3D structure of lightning. The agency funded the University of Oklahoma to bring their mobile polarimetric radars to measure the storm structures in which the lightning occurs, with some surprising results.

"The flashes were not going as high in storms as they thought they were," MacGorman said, adding the radar was showing signatures that could indicate the type of precipitation in these layers.

Some of the weather balloons in the study also feature a particle imager that looks at frozen and liquid precipitation, as well as suspended water and ice particles, in a cloud. Besides determining the characteristics of precipitation that produce the signature, the experimenters aim to better understand how the precipitation is involved in producing the electric charges that cause lightning. [Quiz: The Science of Electricity]

"We know that thunderstorms are charged through rebounding interactions or collisions between graupels — spongy small hail and smaller ice particles. These cause the initial electrification, and other processes can occur to produce additional charge," MacGorman said.

DARPA is funding part of the study in an effort to improve understanding of lightning and protection of personnel and facilities from lightning hazards.

One of NSSL's interests in participating in the Florida experiment is to improve understanding of lightning and its relationships with storms, particularly in concert with satellite observations. The NSSL tracks and studies severe weather in the United States.

The Geostationary Operational Environmental Satellite - R Series (GOES-R) satellites will launch around 2015. The satellite series will have lightning mappers on board to detect lightning flashes in real time over much of the Western Hemisphere, including most of North and South America.

"We believe these data will be an important aid to forecasters, and are working on developing ways the National Weather Service can consider for incorporating lightning data into their operations," MacGorman said.