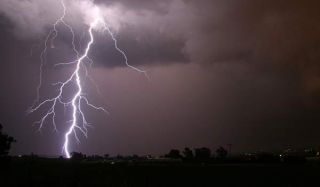 All lightning on Earth may have its roots in space, new research suggests.

Lightning flashes on Earth about 100 times per second, but what triggers lightning in thunderstorms remains mostly unknown. Especially odd is the fact that decades of analysis suggest electrical fields within thunderclouds have only a tenth or so of the strength needed to spark a lightning bolt.

More than 20 years ago, physicist Alex Gurevich at the Russian Academy of Sciences in Moscow suggested lightning might be initiated by cosmic rays from outer space. These particles strike Earth with gargantuan amounts of energysurpassing anything the most powerful atom smashers on the planet are capable of.

However, to kindle lightning, initial calculations suggested very high-energy cosmic rays were needed. These are relatively rare — thunderclouds should each see only one a day, not enough to account for the amount of lightning occurring daily. [Electric Earth: Stunning Images of Lightning]

The answer to this mystery might lie in how thunderclouds possess vast numbers of electrically charged water droplets and ice nuggets, which Gurevich and his colleagues call "hydro meteors." In such energetic surroundings, cosmic rays 10,000 to 100,000 times less energetic than thought could generate the cascades of electrons needed for lightning. Such cosmic rays hit Earth about as often as lightning flashes on the planet.

Gurevich and his colleague Anatoly Karashtin at the Radiophysical Research Institute in Nizhny Novgorod, Russia, analyzed radio pulses from nearly 3,800 lightning strikes detected in Russia and Kazakhstan. The nature of these pulses suggests they may be created by the kind of electrons one would expect to see in the runaway breakdowns from cosmic rays.

If correct, this work "could resurrect the notion that cosmic rays are involved in lightning initiation, an idea that has been questioned in recent years," said physicist Joseph Dwyer, a professor at Florida Institute of Technology, who did not take part in this research.

To help confirm or refute this idea, simultaneous measurements of the showers of energetic particles produced by cosmic rays and the radio pulses from lightning are needed, Dwyer explained. "Such experiments are already being done at several places," Dwyer told OurAmazingPlanet.

Gurevich and Karashtin detailed their findings May 2 in the journal Physical Review Letters.