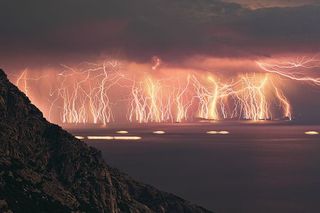 A lucky photographer captured an amazing photo of an intense lightning storm over Ikaria Island, Greece.

Photographer Chris Kotsiopoulos had set out to document the total lunar eclipse on June 15, 2011, but he got more than he bargained for.

"This was an extraordinary storm that took place the night of the total lunar eclipse," Kotsiopoulos told OurAmazingPlanet. "The night started ideally as I managed to capture the lunar eclipse and some lightning at the same shot. After the end of the eclipse I noticed that the storm was insisting."

So Kotsiopoulos took a 70-shot sequence, with each shot a 20-second exposure. He stitched these shots together into the photo. The photo shows some 100 lightning strikes over Ikaria, which is near the southwestern coast of Turkey. The majority of the lightning was cloud-to-ground strikes.

The storm had several quirks that allowed Kotsiopoulos to capture the incredible photo. The storm was about 6.2 miles (10 kilometers) away from the camera and it wasn’t moving, so it was relatively safe to photograph. It wasn't raining, so he could set the camera on a tripod and shoot. The ferocious storm lasted about an hour.

"It was very intense," Kotsiopoulos said. "One lightning every 10-20 seconds."