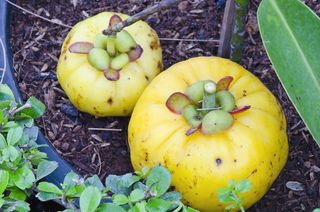 The Malabar tamarind was once just the less popular cousin of a trendy fruit, the mangosteen. But now, nutritional supplements containing extracts of the fruit with the scientific name Garcinia cambogia have become the rage, touted for their purported ability to curb appetite and stop weight gain.

The Malabar tamarind, also known as the gambooge fruit, grows across southwest India, Myanmar and Indonesia. It ripens to a red or yellowish fruit about the size of an orange, but resembling the shape of a pumpkin.

People have long used the dried gambooge rinds for chutneys or curries, and sometimes as an aid for stomach problems. But in the late 1960s, scientists identified a substance in the rind of the fruit called hydroxycitric acid, or HCA, which has some potentially attractive qualities.

"Some studies have shown that HCA stops an enzyme that turns sugar into fat," said Catherine Ulbricht, senior pharmacist at Massachusetts General Hospital in Boston and co-founder of Natural Standard Research Collaboration, which reviews evidence on herbs and supplements.

A fruit extract that could interfere with the body's production of fat? The appeal is obvious. However, good results in test tubes don't always translate to an entire person.

Some studies say HCA works, and some say it doesn't. Animal studies of HCA showed that mice taking the substance ate less, lost weight and produced less fat from sugar.

Human studies had more conflicting results. One weight loss trial showed no difference between people who took Garcinia cambogia and those who took a placebo pill. Other trials linked HCA to weight loss and healthy blood lipid levels (lipids are fats).

"Further, well-designed clinical trials are needed before any firm conclusions can be made," Ulbricht said.

If a pharmaceutical company wanted to sell HCA as a drug, the company would have to find stronger evidence that the substance worked, coming from better-designed clinical trials. Without that data, HCA wouldn't pass U.S. Food and Drug Administration approval, Ulbricht said. But the FDA doesn't put chemicals sold as nutritional supplements under the same burden of proof as pharmaceuticals.

In fact, supplement makers only have to make their products safe to eat and responsibly label them. Also, recent laboratory tests showed that most supplements sold online contain substantially less HCA than the label claims.

Despite the popularity of Garcinia cambogia, it is difficult to track how effective supplements containing it are.

"Preparation of products may vary from manufacturer to manufacturer, and from batch to batch within one manufacturer," Ulbricht said. That makes it difficult to compare one brand to another or even to measure the effects of a single brand.

People may safely eat the fruit, of course. And clinical trials have shown it's safe to take Garcinia cambogia extract by mouth — at least for 12 weeks, the length of the studies.

But take caution. Garcinia cambogia has side effects — it may lower a person's blood sugar, so it can interact with diabetes treatments. The fruit hasn't been adequately studied in pregnant women or women who breastfeed. And Garcinia cambogia may be a problem for patients with Alzheimer's or other forms of dementia, Ulbricht said.

In 2009, the FDA issued a safety warning after receiving more than 20 reports of severe reactions, including liver damage, in people taking the supplement Hydroxycut. At the time, Hydroxycut contained Garcinia cambogia extract and other compounds, including chromium polynicotinate and Gymnema sylvestre extract.

A case study published in 2016 in the World Journal of Gastroenterology by Keri E. Lunsford, et al., examined an instance where Garcinia cambogia caused hepatic failure resulting in the need of a liver transplant. The subject had taken the supplement for several months before his liver had failed. The researchers report that this is the first known case of acute liver failure known to be tied to Garcinia cambogia. Liver damage due to other drugs and alcohol had been ruled out, and Garcinia cambogia was the only supplement or drug that the patient had ingested. Much more research is needed in this area, according to the researchers, and in the meantime, the public should be made aware of the potential risks of taking this supplement.

Ulbricht said it's unclear if the Garcinia cambogia extract caused the liver damage.

The bottom line is that people should tell their doctors before trying a new supplement, including Garcinia cambogia and HCA, she said.