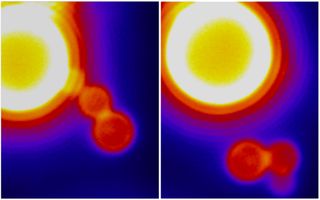 What looks like a fried egg is actually an image showing how cells ingest (and regurgitate) various substances. The study uses an artificial membrane (orange) to simulate a cell. The first image shows two bubble-like structures (lower right) similar to the ones that cells use to import and export molecules. The second image, taken seconds later, shows that these structures have been severed from the membrane and released in the same way cells expel materials.
(Image: © Cover image from Ramachandran, et al. Membrane insertion of the pleckstrin homology domain variable loop 1 is critical for dynamin-catalyzed vesicle scission. Mol Biol Cell. 2009 20:4630-9. )

We need to eat and drink to survive, and so do our cells. Using a process called endocytosis, cells ingest nutrients, fluids, proteins and other molecules.

An international team of researchers recently revealed new details about endocytosis, an activity that, when it malfunctions, can lead to diseases such as muscular dystrophy, Alzheimer's and leukemia.

During endocytosis, the cell membrane curves inward, essentially forming a mouth to engulf ingestible cargo. Previously, scientists thought this mouth-forming, membrane-bending action required a large input of cellular energy. They also suspected it was driven by a pushing contest in the membrane between proteins called dynamin and oily molecules called lipids.

The research team, which included scientists at the National Institutes of Health and NIH-funded researchers at University of Texas Southwestern Medical Center, concluded that the process is much more relaxed: Dynamin and lipids work together, requiring only a modest input of energy, allowing a fine meal to slip down easily.

But it starts with some cellular choking. Where the membrane begins to curve, dynamin and lipid molecules are wedged together uncomfortably. The lipids, more flexible than the proteins, shift within the membrane to relieve overcrowding. As they do so, the membrane bends even more, forming a gaping maw around the meal. The process continues until the two membrane lips meet, fully engulfing the food.

Dynamin seals the mouth shut by encircling the region where the lips meet and tightening to form a pucker. Finally, cellular energy called GTP bites down, releasing the sustenance into the cell. Bon appétit!

Just as a good meal can be ruined by indigestion, endocytosis can be hijacked by parasites, bacteria and viruses that enter and infect human cells. As researchers learn more about endocytosis, they might be able to find ways to prevent this sort of infection.

The research reported in this article was funded in part by the National Institutes of Health under its intramural program and grant R01GM42455.

Inside the Cell booklet

What Color Are Our Cells? Kids' Biology Questions Answered