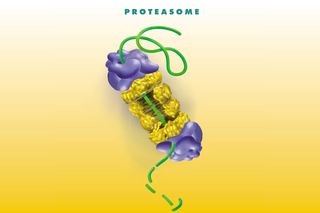 When proteins enter the proteasome, they’re chopped into bits for re-use.
(Image: © Office of Biological and Environmental Research of the U.S. Department of Energy Office of Science.)

Cells rely on garbage disposal systems to keep their interiors neat and tidy. If it weren’t for these systems, cells could look like microscopic junkyards — and worse, they might not function properly.

So constant cleaning is a crucial biological process, and if it goes wrong, it can cause serious problems. Scientists funded by the National Institutes of Health are therefore working to understand the cell’s janitorial services to find ways to combat these malfunctions.

One of the cell’s trash processors is called the proteasome. It breaks down proteins, the building blocks and mini-machines that make up many cell parts. The barrel-shaped proteasome disassembles damaged or unwanted proteins, breaking them into bits that the cell can re-use to make new proteins. In this way, the proteasome is just as much a recycling plant as it is a garbage disposal.

How does the cell know which proteins to keep and which to trash? The 2004 Nobel Prize in chemistry went to three scientists for answering that question. They found that the cell labels its refuse with a tiny protein tag called ubiquitin. Once a protein has the ubiquitin label, the proteasome can grab it, put it inside the barrel, break it down and release the pieces.

Because diseases like Alzheimer’s involve the accumulation of excess proteins, researchers are trying to develop medicines to help the proteasome out. They hope such a treatment would keep brain cells clean and healthy.

Scientists are also interested in designing medicines that turn off the proteasome. Cancer cells, for instance, make a lot of abnormal proteins that their proteasomes have to remove. A proteasome-clogging medicine could prevent cancer cells from recycling their own garbage, leaving them without reusable resources for survival and growth. This is the approach behind the proteasome inhibitor drug bortezomib, which is used for the blood cancer multiple myeloma.

Proteins aren’t the only type of cellular waste. Cells also have to recycle compartments called organelles when they become old and worn out. For this task, they rely on an organelle called the lysosome, which works like a cellular stomach. Containing acid and several types of digestive enzymes, lysosomes digest unwanted organelles in a process termed autophagy, from the Greek words for “self” and “eat.” The multipurpose lysosome also processes proteins, bacteria and other “food” the cell has engulfed.

Lysosomes also gobble up viruses, an activity important to fighting infections. A drug that activates lysosomes protects mice from diseases like West Nile virus. It’s possible that the same or similar medications might treat diseases in which cellular trash piles up, including Alzheimer’s and other diseases of aging.

While cells mainly use proteasomes and lysosomes, they have a couple of other options for trash disposal.

Sometimes they simply hang onto their trash, performing the cellular equivalent of sweeping it under the rug. Scientists propose that the cell may pile all the unwanted proteins together in a glob called an aggregate to keep them from gumming up normal cellular machinery.

For example, a protein called islet amyloid polypeptide builds up in aggregates in the pancreas of people with type 2 diabetes. Other proteins form aggregates in certain brain diseases. Scientists are still trying to understand what these trash piles do and whether they’re helpful or harmful.

If the garbage can’t be digested by lysosomes, the cell can sometimes spit it out in a process called exocytosis. Once outside the cell, the trash may encounter enzymes that can take it apart, or it may simply form a garbage heap called a plaque. Unfortunately, these plaques outside the cell may be harmful, too.

The cell also has ways to toss out some poisons that get inside. This means that cancer cells may pump out cancer drugs that are meant to destroy them, and bacteria may do the same with antibiotics. Scientists are studying how these pumps work, looking for ways to keep the medicines inside where they can do their job.

Further study of the many ways cells take out the trash could lead to new approaches for keeping them healthy and preventing or treating disease.