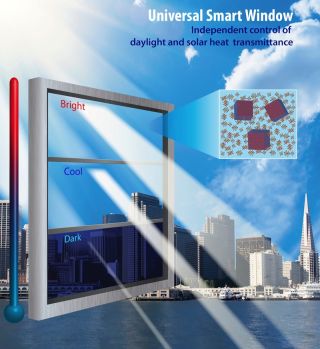 Scientists have developed a "smart glass" that changes, chameleon-like, from opaque to transparent, and can be adjusted for different wavelengths of light. The result may mean no more curtains as well as energy savings in buildings since the glass dynamically controls daylight and solar heat through windows.
(Image: © Anna Llordés, Delia Milliron and Creative Services, Lawrence Berkeley National Lab.)

Big windows provide light, and a view, but they don't always do much for energy efficiency or privacy. The glass transmits heat to the outside in winter and traps it inside during the summer. The only real solution: curtains or blinds.

But now there's a glass that changes, chameleon-like, from opaque to transparent, and can be adjusted for different wavelengths of light. It could boost energy efficiency in buildings with large glass facades, freeing homeowners from the chore of picking window treatments.

The glass is the brainchild of scientists at Lawrence Berkeley National Laboratory (LBNL) in California and the Autonomous University of Barcelona. It's made of niobate, a compound composed of the element niobium and oxygen. The ingredients get mixed together with nanometer-sized crystals of indium tin oxide, or ITO, which is used in touch screens to register when a finger contacts the display. The scientists' experiments appear online in the Aug. 14 issue of the journal Nature. [7 Cool Technologies Inspired by Nature]

The resulting material is called a glass because it has the characteristic structure of a glass: the molecules are all jumbled around, without a clear pattern, like in a liquid. But unlike a liquid, glass doesn't flow. Ordinary window glass is made of silicon dioxide mixed with other chemicals, such as sodium oxide (Na2O), magnesia (MgO), lime (CaO) and alumina (Al2O3), which give it extra strength.

To make their smart glass, the researchers dissolved the niobate in water, then added the nanocrystals of indium tin oxide. The niobate molecules linked up to the ITO, forming tiny clusters. "The art was making the nanocrystals," said Delia J. Milliron, a materials scientist at LBNL, who led the study. Otherwise, Millironsaid, the chemistry is relatively straightforward, and all done at room temperature.

The researchers then let the solution evaporate while heating it, which transformed the niobate-ITO mixture into an amorphous solid — a glass — surrounded by nanocrystals covered in niobate.

Scientists next put the niobate glass layer on top of an electrode and then added a layer of a liquid electrolyte to the glass, followed by a second electrode. When researchers applied a voltage across the electrodes, the glass changed its transparency. At 4 volts, the glass was fully transparent, but at 2.3 volts it blocked near-infrared light. And at 1.5 volts, it blocked visible and near-infrared light.

This works because the electrical charges alter the structure of the nanocrystals so that they block certain wavelengths.

In real-world uses, the smart glass would be a micrometer-thick layer placed on top of a normal pane, but there's still work to be done to make this smart glass a fixture in buildings.

For one thing, the electrolyte will probably have to be a solid. The team will also have to find a good material for the electrodes — in the experiment they used lithium for one electrode, but that isn't practical or safe for large panes.

Even so, the door (or window) is now open to materials that change in response to commands, made in a way that doesn't require exotic manufacturing techniques.