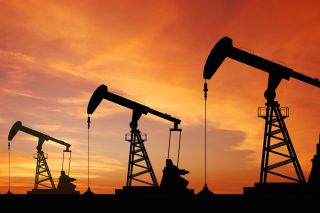 When — or if — oil production begins to decline, the effect will be global and will be accompanied by dramatic upheaval.
(Image: © Thaiview | Shutterstock)

Peak oil — the point in time when domestic or global oil production peaks and begins to forever decline — has been looming on the horizon for decades. Countless research reports, government studies and oil industry analyses have tried to pin down the exact year when peak oil will occur, to no avail.

The stakes are undeniably high: Much of human civilization is now inextricably linked to a readily available supply of inexpensive oil and petroleum products. From heating, electricity production and transportation to cosmetics, medicines and plastic bags, modern life runs on oil.

In October 1973, the world was roiled by the OPEC oil embargo. Members of the Organization of Petroleum Exporting Countries agreed to stop exporting oil to the United States, much of Western Europe, Japan and several other nations.

Though the oil embargo only lasted five months (until March 1974), it sent shock waves throughout the industrialized world and underscored our utter dependence on petroleum. Many government leaders and academic institutions realized, even after the embargo ended, that the global oil economy couldn't last forever.

Years earlier, in 1956, geologist M. King Hubbert at Shell Oil Company (and later at the U.S. Geological Survey) predicted that oil production in the lower 48 U.S. states would peak sometime around 1970.

Though his comments generated much controversy, he was later vindicated when institutions such as the National Academy of Sciences and the Energy Information Agency (EIA) confirmed that his now-famous bell curve predicting the 1970 peak was correct, despite much rosier predictions made by industry and government analysts.

'Hubbert got a lot of notoriety in his lifetime for correctly predicting U.S. oil would peak in 1970," said Alan Carroll, a geologist at the University of Wisconsin-Madison and author of "Geofuels: Energy and Earth" (Cambridge University Press, 2015). "That same logic was extended to world oil production, and there have been many predictions that global production will reach a peak, none of which have happened yet," Carroll said.

When Hubbert turned his sights to global oil production in 1974, his report was equally disturbing, especially in light of the OPEC oil embargo: He predicted that the world's peak oil production would occur in 1995, assuming that current production and use trends continue.

In 1988, Hubbert said in an interview, "We are in a crisis in the evolution of human society. It's unique to both human and geologic history. It has never happened before and it can't possibly happen again. You can only use oil once."

Does peak oil even exist?

Since Hubbert introduced the concept of peak oil, countless forecasters from every corner of the industrial, governmental and academic worlds have tried to substantiate or refute Hubbert's prediction.

Geoscientist Kenneth S. Deffeyes, author of "When Oil Peaked" (Hill and Wang, 2010), asserted that peak oil happened on Thanksgiving Day 2005. Meanwhile, petroleum geologist Colin Campbell, a founder of the Association for the Study of Peak Oil (ASPO), once estimated that peak oil had occurred around 2010, but his views have shifted somewhat as new data have become available.

The trouble is, determining when peak oil will occur, if it already has occurred, or if it will happen at all, are all dependent on an ever-changing set of assumptions and variables.

"The basic assumption of peak oil analysis is that you have prior knowledge of what the available reserves are, and in fact we do not," Carroll said.

Reserves are the known amount of oil that can be extracted given present-day prices and present-day technology, Carroll explained. But peak oil also depends on oil prices and available technology. For example, hydraulic fracturing, aka fracking, has opened up numerous oil fields in areas that were once considered played out or too costly to develop.

As a result of expanded fracking production, places like North Dakota — home of the Bakken formation of oil-bearing shale rock — are now experiencing an oil boom, and are likely to shift the global energy picture in dramatic ways over the next decade.

Thanks to fracking, instead of resembling a bell curve, U.S. oil production is back on the rise. Through the first half of 2014, the United States produced an average 8.3 million barrels a day. "We may have a second peak [of oil production] in the U.S.," Carroll said. "Maybe Hubbert wasn't right."

Demand for fossil fuels is another critical factor in the debate over peak oil. Developing countries like China, India and Brazil have become big markets for oil (and other fossil fuels such as coal). As these enormous markets expand — and as the global population continues to increase beyond the 7 billion mark — the demand for oil increases.

And as the demand for fossil fuels like oil increases, the supply of these resources dwindles, or so some have argued. But the amount of available oil is not uniform. For instance, reserve estimates may be inaccurate. In California's San Joaquin Valley, production has well exceeded its initial 800 million barrel estimate, with 2.5 billion barrels already drilled and production continuing to grow through secondary recovery efforts, Carroll said.

Unconventional oil, however, isn't readily or cheaply available. Sources like the tar oil sands of Canada, shale oils from the Bakken formation, coal oil (liquefied fuel from coal) and biofuels (ethanol, biodiesel and other liquid fuels from plants like switchgrass) are expected to form an increasingly important resource in the 21st century.

"We might hit a peak in terms of conventional oil, but coming in behind that are the oil sands, oil shales, the methane hydrates, and they will prevent consumption from simply dropping in a peak fashion," Carroll said.

Costs and benefits of unconventional oil

EIA administrator Adam Sieminski points out a crucial issue in what makes oil available — its cost. When the price of oil reaches a certain point, it becomes profitable to drill in areas and in ways that would not be profitable if oil were too cheap.

Deepwater drilling, for example, is an expensive and risky drilling procedure that usually takes place miles offshore in waters more than 500 feet (152 meters) deep. Roughly 80 percent of the oil produced in the Gulf of Mexico comes from deepwater wells, according to the U.S. Energy Information Administration.

The risks of deepwater drilling — and all unconventional oil development — were thrown into sharp relief in 2010, when BP's Deepwater Horizon well exploded, killing 11 people and spilling an estimated 205 million gallons (776 million liters) of oil into the Gulf of Mexico. It was the largest oil spill in U.S. history, eclipsing even the Exxon Valdez oil spill of 1989.

Despite the high costs and the risks, unconventional oil exploration and drilling makes sense when the price of oil is high — and according to energy consultants Wood Mackenzie, spending on deepwater drilling should grow from $43 billion in 2012 to $114 billion in 2022.

Thus, the amount of oil that's available for refining isn't fixed, even though the overall quantity of oil on Earth is finite.

A peak, or a plateau?

In a much-quoted (and much-criticized) report from 2006, Cambridge Energy Research Associates (CERA) presented an analysis that found 3.74 trillion barrels of oil available — far more than the 1.2 trillion barrels estimated by some earlier analyses.

Their research suggested that oil production won't simply reach a peak, followed by a precipitous decline. Instead, "global production will eventually follow an 'undulating plateau' for one or more decades before declining slowly."

From their research, CERA also determined that "the global production profile will not be a simple logistic or bell curve postulated by geologist M. King Hubbert, but it will be asymmetrical — with the slope of decline more gradual … it will be an undulating plateau that may well last for decades."

Their analysis calls into question the very idea of "peak oil" as a useful model for energy forecasting or governmental policy: "The 'peak oil' theory causes confusion and can lead to inappropriate actions and turn attention away from the real issues," CERA director Peter M. Jackson said. "Oil is too critical to the global economy to allow fear to replace careful analysis about the very real challenges with delivering liquid fuels to meet the needs of growing economies."

Whether oil production peaks or plateaus, one underlying fact drives the issue: "World production of conventional oil will reach a maximum and decline thereafter," according to a 2005 in-depth analysis co-authored by Robert L. Hirsch and commissioned by the U.S. Department of Energy (widely referred to as "the Hirsch report").

"Prediction of the peaking is extremely difficult because of geological complexities, measurement problems, pricing variations, demand elasticity, and political influences," the report concludes. "Peaking will happen, but the timing is uncertain."

Other scientists, such as Carroll, question whether a true peak will ever be reached, given the remarkable quantities of carbon stored in the planet's crust. "There's potential for an enormous increase in quantity if one is willing to go for lower quality," he said.

Regardless of when or how oil production begins to decline, according to the Hirsch report, its effects will be global and will be accompanied by dramatic social, political, economic and environmental upheaval.

Mitigation of these effects — through conservation and development of alternative energy sources — will require advance planning and "an intense effort over decades," according to the report. "There will be no quick fixes. Even crash [mitigation] programs will require more than a decade to yield substantial relief."

The final word on peak oil may belong to Campbell, who was among the first to foresee its arrival: "The Stone Age did not end because we ran out of stone, but because bronze and iron proved to be better substitutes," he wrote in 2001. "Firewood gave way to coal; and coal to oil and gas, not because they ran out or went into short supply but because the substitutes were cheaper and more efficient. But now, oil production does reach a peak without sight of a preferred substitute."