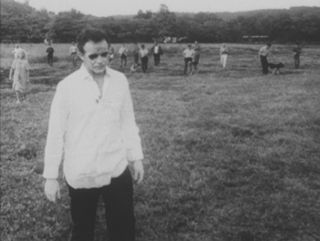 A still of the flesh-eaters in "Night of the Living Dead."
(Image: © Public domain)

NEW YORK — When Harvard Medical School professor and psychiatrist Dr. Steven Schlozman sat down here at LiveScience's offices to talk about zombies, he wanted to get one thing out of the way.

"They're not real," Schlozman said. "They don't exist. I'm a practicing physician, and I'm required to tell you when you should be worried — you don't need to worry about zombies."

Schlozman has made a name for himself as "Dr. Zombie," an expert on the undead. He recently teamed up with actress Mayim Bialik, who plays a neuroscientist on "The Big Bang Theory" and actually holds a doctorate in neuroscience in real life, for a new program called STEM Behind Hollywood. (STEM stands for science, technology, engineering and math.)

The initiative aims to explain the real-world concepts behind movie plots — including zombie-movie plots — with classroom activities developed by calculator maker Texas Instruments and scientists who consult for Hollywood films.

We caught up with Schlozman on Wednesday (Aug. 7) and learned how to diagnose the undead, and how to track a real-life zombie apocalypse.

"My wife, in 2008, was diagnosed with breast cancer. She's totally fine now. But at the time, I couldn't sleep," Schlozman said.

One night when he couldn't sleep, he turned to late-night TV and happened to catch "Night of the Living Dead," considered the first true American zombie movie, made on a low budget in 1968 by George Romero.

"I started watching it, and I was thinking, 'They're sick. They're not just ghouls stumbling around in this graveyard … They're ill with something,'" Schlozman said.

He couldn't cure his wife's cancer, Schlozman thought, but maybe he could tackle the zombie problem. So he sat down and wrote a fake medical paper about zombies, which made the rounds on the Internet. Soon, he was getting speaking engagements. He eventually published a book, "The Zombie Autopsies: Secret Notebooks from the Apocalypse" (Grand Central Publishing, 2011), which is now being made into a movie, directed by none other than George Romero.

"The ones I like, the ones I find most scary and the most compelling, are the slow, shambling, dumb-as-a-doorknob zombies," Schlozman told LiveScience. "You could eat a sandwich while you're running away from them. They can't open windows, can't open doors, and they want to eat you."

But in his book, Schlozman departs from the traditional concept of zombies by creating characters who are only philosophically dead.

As a physician, it's nearly impossible to watch movies about zombies without diagnosing their obvious neurological problems, Schlozman said. Even though the symptoms are fictional, they can be useful teaching tools for students. The "Zombie Apocalypse" activity on Texas Instruments' app walks students through the signs of worsening sickness, showing which parts of the brain would be affected.

"The first thing you would notice is a shuffling gait, difficulty walking well, difficulty with balance, difficulty with knowing where your body is in space," Schlozman said. Those problems would be rooted in the cerebellum, a region at the bottom of the brain responsible for motor skills and coordination, he said. [Zombie Animals: 5 Real-Life Cases of Body-Snatching]

"You'd also notice they're not very bright," he added. "They don't seem to know what they're doing."

Those symptoms would indicate some damage or abnormality in the frontal lobe, which also controls impulsivity Schlozman said. "You've never seen a hesitant zombie," he noted.

The undead are not only dumb and impulsive, but also angry, which could be a sign of overexcited amygdalae, the pair of almond-shaped regions of gray matter deep inside the brain, Schlozman said.

But maybe zombies are angry because they simply can't get enough to eat. Their ravenous hunger, Schlozman noted, is maybe the most difficult symptom to explain from a clinical standpoint.

"The idea of being insatiably hungry and ill — that's a hard one to pull off, but you can do it," Schlozman said. "There are certain viruses and also certain lesions that can affect a region of the brain — the ventromedial hypothalamus — that affect satiety, and that affects the sense that you've eaten enough." Strains of human adenovirus, for example, have been linked to obesity.

How the zombie virus spreads

The symptoms of being a zombie don't add up to any recognizable disease, so it's not easy to find an exact parallel between the imagined zombie apocalypses of the movies and the outbreaks that epidemiologists dread in the real world. But the pattern of a pandemic can be represented quite neatly on a graph, whether it unfolds slowly or quickly, through splattered brains or airborne droplets.

"Any contagion that spreads has a certain mathematical way that it spreads," Schlozman said. With mathematical models, researchers can ask, "If there were a zombie bug, what would the spread look like if it were spread through biting?" he said.

Viruses transmitted through bites, such as the rabies virus, don't actually spread quickly because they can be isolated, Schlozman said. The spread of an airborne virus, such as influenza, meanwhile, could spread rapidly across a region, he added. That's the model he chose for "The Zombie Autopsies."

If there were ever a zombie takeover that looked like one in the movies, it would probably have to be set off by some sinister man-made pathogen.

Zombie movies would be much less exciting if they were just about the lumbering, flesh-eating corpses.

"That would be like a story about snails," Schlozman said. "They just would bump into each other, and it would be boring."

A good zombie movie with a happy ending tends to have humans overcoming their petty differences and banding together to quell the unstoppable tide of the undead. In the real world, those Hollywood-style dramas often play out on the international stage.

Schlozman pointed to the 2003 outbreak of SARS (short for severe acute respiratory syndrome), which sickened 8,000 people worldwide, and killed nearly 800.

"We would have gotten that genie back into the bottle sooner had the place where the virus originated — which was primarily China — been more willing to cooperate early on," he said.

But by the time a strain of the H1N1 flu virus caused a swine flu outbreak in 2009, international cooperation came together more smoothly. China was much more forthcoming with the World Health Organization, and epidemiologists were much better able to track the flu's spread, though it turned out to be less deadly than initially feared.

Why we love zombies

Zombie movies often reflect a culture's greatest fears. The thing that turns people into zombies is usually whatever we're most afraid of at the time, Schlozman said.

"When they [zombie movies] first started being made in the '60s, it was Cold War, radiation — and it's oozed its way toward pandemic, and in that pandemic mode, it took on an apocalyptic feel," he said.

Studies show that during times of economic stress, zombie movies become more popular, he said, because they represent what happens when the system is stressed and breaks down.

Schlozman said he also suspects that people's fascination with zombies partly stems from a longing to reconnect with one another.

"People ask, 'Why do we have these zombie walks? ... Why would you dress up like a dead person and walk around?'" he said. "Well, no one texts on a zombie walk. No one's looking at their phones; people are talking to each other. I think there's a desire to get back together … You can't be any more off the grid than a zombie."