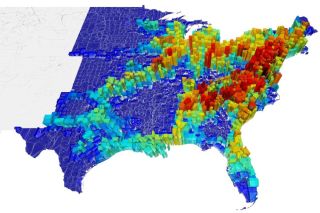 During infectious disease outbreaks, personal freedom comes at a price: the welfare of the public as a whole, a new study finds.

In the research, scientists investigated whether, in the event of an outbreak, people should be allowed to move about freely or if authorities should enforce travel restrictions to halt the disease's spread.

"What we were trying to understand better is how actions, in terms of routing humans, could affect the spread of disease," said study researcher Ruben Juanes, a geoscientist at MIT in Cambridge, Mass. [The 5 Most Likely Real-Life Contagions]

The price of anarchy

The researchers borrowed a concept from game theory known as the "price of anarchy," which they defined as "the loss of welfare due to selfish rerouting compared with the policy-driven coordination."

Juanes and colleagues modeled the epidemic problem as two scenarios. In a free-movement scenario, people act selfishly to avoid infected areas, regardless of whether or not they themselves are infected, Juanes told LiveScience. In a policy-driven scenario, government agencies dictate that infected individuals move only within infected areas, while healthy individuals keep to unaffected areas, he said.

If the price of personal freedom is low — the spread of the disease is similar whether or not movement controls are imposed — it provides a clear answer regarding restrictions, Juanes said. "You come to the conclusion that it's not worth doing," he said, adding that these restrictions could be very costly and unpopular.

But if the price of such freedom is high, and movement restrictions could significantly slow the disease's progression, government agencies might want to implement these policies, Juanes said.

The researchers looked at census data on the passage of commuters within and among U.S. counties. Scientists compared how the disease would spread in different counties under the two different scenarios.

Not all areas would benefit equally from such restrictions, the findings showed. Places that had high traffic both within and among counties saw the most benefit from restricting travel. For example, counties near a major interstate highway, such as I-80 from New York to San Francisco or I-95 from the Canadian border to Miami, had a higher cost of anarchy — meaning travel restrictions would be helpful.

By contrast, low traffic areas did not benefit much from travel restrictions, so their cost of anarchy was lower, the model showed.

Surprisingly, some densely trafficked areas still wouldn't benefit much from travel restrictions. The policies only benefitted high-traffic regions that were near other high-traffic areas. "It was only when we established the longer-range correlation [with neighboring high-traffic areas] that we could make sense of it," Juanes said.

Physicist Alessandro Vespignani of Northeastern University in Boston, who was not involved with the study, called it an interesting contribution to scientists' understanding of social behavior and of how people adapt to learning of an epidemic. Still, "many elements of realism are still missing in the modeling approaches," Vespignani cautioned. More studies are needed "to fully understand the effects of behavioral reactions in the spreading of large-scale epidemics," he said.

Even if travel restrictions can limit disease spread, implementing these policies may be unrealistic, Juanes said. The economic cost of rerouting a large population could be immense, he said, and people may be reluctant to give up their freedom.

Nonetheless, "there are events in which people understand that some extreme measures are perhaps admissible," Juanes said, citing the lockdown of Boston while police searched for the Boston Marathon bombers.

"In some extreme cases, it is conceivable to impose far-reaching travel restrictions," he said.