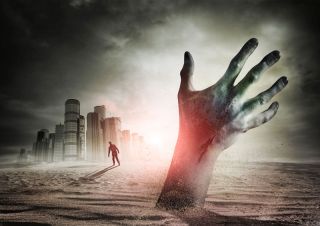 A mathematical model, done tongue-in-cheek, reveals zombies are viruses of the monster world, and if left unchecked an infestation would lead to a zombie apocalypse. That is, unless humans intervened to eradicate zombie-ism.
(Image: © solarseven | Shutterstock)

This equation could spell your doom: (bN)(S/N)Z = bSZ. That is, if you ever found yourself in the midst of a zombie pandemic.

That's because the calculation describes the rate of zombie transmission, from one walking dead individual to many, according to its creators, Robert J. Smith?, a mathematics professor at the University of Ottawa who spells his name with a "?" at the end, and his students. Smith's work has inspired other researchers to create zombie mathematical models, which will be published with Smith's work in the upcoming book, "Mathematical Modeling of Zombies" (University of Ottawa Press, 2014).

Though of course done tongue-in-cheek, Smith's study demonstrates why zombies are the viruses of the monster world. Their likeness to viruses makes the creatures ideal subjects for theoretical epidemiological analyses, which can be used to capture the public's imagination as well as explore scientific principles, Smith said. [Zombie Facts: Real and Imagined (Infographic)]

As for a zombie apocalypse, Smith's model shows that a zombie infection would spread quickly (with N representing total population, S the number of susceptible people, Z the zombies, and bthe likelihood of transmission). It also shows that zombies would overtake the world— there's no chance for a "stable equilibrium" in which humans could coexist with the undead or eradicate the disease.

Only coordinated attacks against the zombies would save humanity, the model shows.

Models of disease outbreaks, like the one Smith developed, play a prominent role in real-life epidemiology, Smith said.

"Unlike most popular monsters, zombies are inherently biological in nature," said Mat Mogk, founder of the Zombie Research Society. "They don't fly or live forever, so you can apply real-world biological models to them."

Zombies are walking representations of a contagion, because they depict flesh-devouring monsters who spread their affliction by gnawing on the healthy. Some recent zombie flicks, notably "28 Days Later" and "Zombieland," even explicitly portray zombieism as a virus.

"A zombie is a bit like giving a virus legs and teeth," said Ian MacKay, a virologist at the Australian Infectious Diseases Research Centre, University of Queensland, who blogged about "World War Z." "This is basically a virus taking over a host, and spreading very quickly and efficiently. … It's an extreme virus-transmission event, if you like."

In "World War Z," Brad Pitt plays a U.N. inspector searching the globe for the origin of the zombie outbreak, paralleling the quests of many real-life virus hunters, Mackay said. "Trying to find the index case, or case zero, bears quite a resemblance to conventional epidemiology," Mackay said. The movie is (somewhat loosely) based on Max Brooks' novel of the same name, which included unprecedented, true-to-life detailabout the political, medical and sociological ramifications of a zombie outbreak, earning the thriller a spot on a U.S. Naval War College reading list. [Outbreak! The 5 Most Likely Real-Life Contagions]

Analyzing zombies adds a couple of new wrinkles to traditional disease modeling, Smith said: Dead people can be resurrected as zombies, and humans will attack the infected. "Usually, the dead aren't a dynamic variable," Smith said. "And people don't try to kill the people who have an infection."

Those elements — infections and attacks on zombies — made the model more complicated, because they introduce two nonlinear factors, or factors that don't change at a constant rate, said Smith, who has modeled outbreaks of HIV, malaria and West Nile virus. Most disease models include only one nonlinear element: disease transmission. Having two nonlinear factors makes zombie math extremely sensitive to small changes to parameters, Smith said.

The most important parameter, however, was the infectivity of the zombie disease. In zombie movies, the affliction spreads fast, Mackay said. In "World War Z," for instance, Pitt's character counts out the seconds from bite to zombification, whereas most infections take days, months or even years in the case of HIV to manifest.

That high infectivity makes the zombie epidemic unstoppable in most cases, according to Smith's model. "Because it only takes one zombie to overtake a city," neither quarantine nor a slower disease progression could stop the Zombie Apocalypse — only delay it, Smith said. Only frequent, increasingly effective attacks against humanity's transformed brethren would win an actual zombie war, he said. [End of the World? Top 10 Doomsday Fears]

Applying such techniques to the flesh-devouring masses provides more than geeky entertainment, Smith said. It also serves an educational purpose, with a number of colleges and even high schools using the paper to introduce mathematical modeling to students, he said. "Teachers say it's the first time they've gotten their kids interested in math."

Tara Smith, an infectious disease professor at the University of Iowa, uses the paper to show how math models can predict the effects of quarantines, vaccines and other public health measures.

The zombie model's methods have already proved useful in at least one real-life analysis. While working on a model of HPV (human papillomavirus), Robert Smith's team noted that transmission via both gay and straight sex introduced two nonlinear variables to the equation. Fortunately, the zombie model had already blazed this path, demonstrating how to handle multiple nonlinear factors.

That real-world relevance in part explains the pop-culture resurgence of zombies over the last few years, Mogk said. As epidemics and emerging diseases like SARS and swine flu have grabbed the headlines, zombie fictions like "Walking Dead" and "28 Days Later" have brought the undead a new cultural cachet, he said.

"With increasing urbanization, you're getting all these new diseases," he said. "It's almost a disease of the week or disease of the month now." And those flesh-hungry viruses-with-teeth are poised to reflect the public's pandemic-related anxieties.