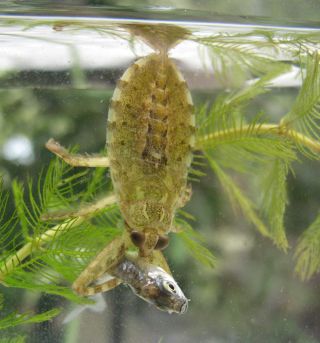 Scientists captured the larva of a giant water bug feeding on a small fish. The insects inject caustic digestive saliva into their prey, liquefying their meal from the inside so that they can suck out the contents.
(Image: © Nikolay Simov)

Insects are pretty low on the food chain, but there are some bugs that turn the tables, making meals out of other animals like fish and amphibians.

Scientists have captured video footage of a ferocious water bug ambushing a small fish and eating it from the inside out.

The unlikely predator, Lethocerus patruelis, is the largest European water insect, measuring more than 3 inches long (8 centimeters) in adulthood. It belongs to the Belostomatidae family of insects, which are commonly called electric light bugs or toe-biters. Their bite is considered one of the most painful to humans, but it doesn't have any harmful medical effects.

These bugs are big enough to capture and devour small crustaceans, fish and amphibians. There have even been some reports of the insects eating turtles and snakes. When they attack, the aquatic bugs inject caustic digestive saliva into their prey, liquefying their meal from the inside before they suck out the contents.

Lethocerus patruelis is found throughout the Balkan Peninsula, Anatolia, and parts of the Middle East. The researchers captured the video while studying the male reproductive system of the species. Their findings were published in the journal ZooKeys.