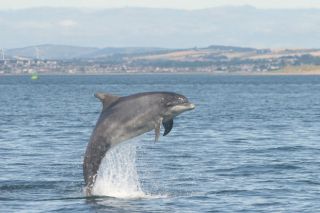 Dolphin deafness can be caused by aging, underwater noise or other factors.
(Image: © Vincent M. Janik, University of St Andrews)

In waters from Florida to the Caribbean, dolphins are showing up stranded or entangled in fishing gear with an unusual problem: They can't hear.

More than half of stranded bottlenose dolphins are deaf, one study suggests. The causes of hearing loss in dolphins aren't always clear, but aging, shipping noise and side effects from antibiotics could play roles.

"We're at a stage right now where we're determining the extent of hearing loss [in dolphins], and figuring out all the potential causes," said Judy St. Leger, director of pathology and research at SeaWorld in San Diego. "The better we understand that, the better we have a sense of what we should be doing [about it]."

Whether the hearing loss is causing the dolphin strandings — for instance, by steering the marine mammals in the wrong direction or preventing them from finding food — is also still an open question.

Dolphins are a highly social species. They use echolocation to orient themselves by bouncing high-pitched sound waves off of objects in their environment. They also "speak" to one another in a language of clicks and buzzing sounds. Because hearing is so fundamental to dolphins' survival, losing it can be detrimental. [Deep Divers: A Gallery of Dolphins]

A 2010 study found that more than half of stranded bottlenose dolphins and more than a third of stranded rough-toothed dolphins had severe hearing loss. The animals' hearing impairment may have been a critical factor in their strandings, and all rescued cetaceans should be tested, the researchers said in the study, detailed in the journal PLOS ONE.

How exactly do scientists give dolphins a hearing test? In captivity, dolphins and whales can be trained to press a paddle or make a noise when they hear a test sound. But a different approach is needed for wild animals.

Above water, animals perceive sound via airwaves. But underwater, dolphins hear primarily via pressure changes in their jawbone, so researchers use a "jawphone," which consists of a suction cup placed on the dolphin's lower jaw to produce sound pulses. Electrodes embedded in the suction cups measure brain responses to the sounds.

Dolphins can become deaf for a variety of reasons. The most common cause is age-related hearing loss, said Dorian Houser, a marine biologist at the National Marine Mammal Foundation in San Diego. Like humans, dolphins tend to lose their high-pitch hearing first, and males tend to go deaf more often than females, Houser told LiveScience.

Some dolphins are also born with impaired hearing; certain drugs used to treat the animals' other health problems can also cause hearing loss. Other causes are chronic exposure to noise (such as from shipping), or exposure to short-lived intense noise (such as explosions).

Many studies have investigated the effects of military sonar on dolphin hearing. "There's mounting evidence that midfrequency sonar may be impacting dolphins and whales," St. Leger said.

The animals may lose hearing for a short time and then recover — the so-called rock-concert effect, Houser said. But they'd have to be pretty close to the source of the sonar and be exposed to it repeatedly, he added. Studies have shown temporary hearing loss from sonar, but less is known about its long-term effects. The bigger concern is how sonar could disrupt the dolphins' behavior. For example, the high-frequency pings can mask the calls of dolphins and whales and scare them away from their habitats.

As for deafness in dolphins, researchers are still trying to get a handle on the problem's prevalence, which may not be as pronounced as the PLOS ONE study suggested, Houser said. "But I think, in time, we're going to answer the question," he said.