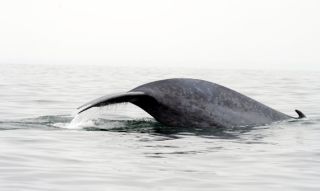 The oceans are increasingly cluttered with human-made noise, which can disturb even the largest animals on Earth, blue whales, new research shows.

Whales depend on vocalizations to communicate with other individuals in their species over long distances. But sonar blips that the U.S. military uses in underwater navigation, object-detection and communication are feared to mask whale calls, deter the marine mammals from their habitats and damage the animals' hearing, researchers say.

Mid-frequency sonar signals (between 1 kHz and 10 kHz) have been blamed for mass strandings of deep-diving beaked whales before. There are fewer cases of sonar-linked strandings of baleen whales, those that have plates for filtering food rather than teeth, like blue whales. [Infographic: The World's Deepest Ocean Divers]

To test how blue whales feeding off the coast of Southern California might be affected by mid-frequency sonar, a team of scientists exposed a group of the creatures to sonar sounds between 3.5 and 4 kHz that were not as loud as the kind the military uses. The whales were tagged with suction cups that recorded acoustic data and movements as the animals were exposed to the controlled sounds.

Though not all of the whales responded in the same way, some of the mammals avoided their feeding grounds and fled from the source of the noise, the researchers found.

"Whales clearly respond in some conditions by modifying diving behavior and temporarily avoiding areas where sounds were produced," study author Jeremy Goldbogen, of the nonprofit Cascadia Research Collective, said in a statement from Duke. "But overall the responses are complex and depend on a number of interacting factors."

There are only 5,000-12,000 blue whales remaining today, according to the National Oceanic and Atmospheric Administration (NOAA). The new study suggests sonar may be a threat to the endangered species.

"Our results suggest that frequent exposures to mid-frequency anthropogenic sounds may pose significant risks to the recovery rates of endangered blue whale populations, which unlike other baleen whale populations (i.e. humpback, grey and fin whales), have not shown signs of recovery off the western coast of North America in the last 20 years," the researchers wrote.

The study was detailed in the journal Biology Letters on July 3.