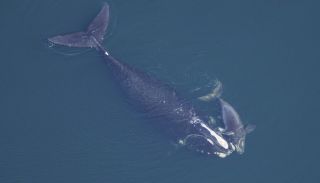 The Atlantic Right Whales are having reproductive problems. Some years the 425 whale population will have only one calf, while other years they've had up to 31 calves.
(Image: © New England Aquarium)

In the fall of 1972, then-President Richard Nixon signed the Marine Mammal Protection Act, providing sweeping protections for whales, dolphins, seals and other species swimming in U.S. waters whose populations had dwindled due to commercial fishing and accidental killing.

The law invigorated conservation efforts and prohibited hunting, killing, capturing and even harassing marine mammals (which we're reminded of when beachgoers in Florida get caught riding manatees or sickly sperm whales.)

More than 40 years later, a new report shows that the law has been effective: It not only prevented extinctions that seemed imminent, but also helped some species bounce back in strong numbers, researchers say.

The scientists looked at hundreds of data sets on the populations of more than 200 marine mammals. They found that some animals have struggled to recover, like the endangered right whale, which was heavily targeted by the whaling industry. But others are back on the rise.

"We have seen remarkable recoveries of some populations of marine mammals, such as gray seals in New England and sea lions and elephant seals along the Pacific coast," Andrew Read, professor of marine biology at Duke University, said in a statement.

Another researcher on the new study, University of Vermont conservation biologist Joe Roman, said it's "safer to be a marine mammal in U.S. waters than elsewhere," even though American waters host considerable ship traffic, big fishing industries and other threats like pollution.

The researchers say there are some problems, however, the law has not successfully addressed: new diseases, depleted food resources (which might be behind the recent California sea lion strandings), and underwater ship noise that can drown out whale songs and other marine mammal communications.

"Existing conservation measures have not protected large whales from fisheries interactions or ship strikes in the northwestern Atlantic," the scientists wrote.

Their study was published online on March 22 in the Annals of the New York Academy of Sciences.