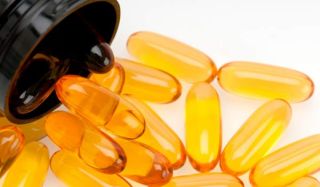 Katherine Tallmadge, M.A., R.D., is a registered dietitian; author of "Diet Simple: 195 Mental Tricks, Substitutions, Habits & Inspirations" (LifeLine Press, 2011); and a frequent national commentator on nutrition topics. This article was adapted from one that first appeared in the Washington Post. Tallmadge contributed this article to LiveScience's Expert Voices: Op-Ed & Insights.

I first became interested in the power of omega-3 fatty acids when psychiatrists I work with began prescribing the nutrient to depressed patients, finding it made positive improvements. Then, I started hearing about the potential benefits of omega-3s for arthritis and other inflammatory diseases. Could it be possible that one nutrient could provide so many benefits?

The connection between omega-3s and health was first observed in the 1970s. Scientists observed that Inuit populations in Greenland had a reduced rate of heart disease, rheumatoid arthritis and other ailments even though they ate a high-fat and high-cholesterol diet. The researchers hypothesized that the type of fat — marine-derived — might play a role. Since then, study after study has confirmed that omega-3s in fish have a potent effect on reducing heart disease .

"Omega-3 favorably affects a number of risk factors for cardiovascular disease, and at the top of the list is reducing the risk of sudden death from heart attack," said Penny Kris Etherton, distinguished professor of nutrition at Pennsylvania State University.

But when it comes to the benefits of omega-3s, that may be just the tip of the iceberg!

The two most potent omega-3 fatty acids are known as docosahexaenoic acid (DHA) and eicosapentaenoic acid (EPA). They're usually found in a 50:50 or 60:40 ratio in fish . These fatty acids are essential nutrients and enter every cell membrane in the human body, serving as a cell lubricant, improving flexibility and communication between cells, and aiding cell metabolism and gene expression.

Researchers have shown that omega-3 fatty acids, a type of polyunsaturated fat found primarily in seafood, can improve your chances of living longer if you have heart disease. But its healing powers don't stop there. Other organs may benefit.

While not an answer to every ailment, omega-3s have a positive impact from the womb to old age, with studies showing significant physiological and psychological benefits.

In fact, omega-3s are so important to human health, the Institute of Medicine's Food and Nutrition Board recently set a minimum daily requirement for the first time. For years, we thought there was only one essential fatty acid, omega-6 fatty acid (found in vegetable and soybean oils), but now scientists have added omega-3 to the list of essential nutrients humans must get from their diets.

But as we've discovered in nutrition, balance is everything. The two essential fatty acids, omega-6 and omega-3, must be in harmony with each other for proper functioning. If one or the other is too high or too low, negative consequences result.

"If you eat too much omega-6, as is the case with today's American diet, this promotes inflammation, blood clotting and constricts blood vessels," said Artemis Simopoulos, president of the Center for Genetics, Nutrition and Health and the author of "The Omega Diet" (Harper Collins, 1999). "When your cells contain equal amounts of omega-6 and omega-3, as was the case with early humans, this promotes less inflammation, less constrictive blood vessels and prevents clot formation, all important functions in preventing many diseases."

The ideal ratio of omega-6 to omega-3 is the hottest debate among omega-3 researchers. If you followed the fatty-acid recommendations of the National Academy of Sciences and had an intake of 12 grams of omega-6 for women (17 grams for men), and an omega-3 fatty acid intake of 1.1 grams for women and 1.6 grams for men, your ratio of omega-6 to omega-3 would be approximately 10 to 1. But many omega-3 researchers say a ratio of 1 to 1, 2 to 1 or even 5 to 1 is ideal. If you're a typical American, the ratio that you are actually ingesting could be as high as 12 to 1 or 15 to 1. Still others believe a specific ratio doesn't matter. But, they all agree on the need to get more omega-3s.

Omega-3 concentrations are highest in the brain and nervous system. The fatty acids are necessary for optimal functioning of the neurons, protect cells, decrease cell death and improve nerve transmission.Emerging research indicates omega-3s may boost levels of the brain chemicals serotonin and dopamine, decreasing depression and violence.

"In 5 out of 6 of the clinical trials where people were given either a placebo or omega-3 fatty acids, on average, the symptoms of depression have been reduced by about 50 percent," said Joseph Hibbeln, a psychiatrist at the National Institutes for Alcohol Abuse and Alcoholism. "This is true even when the subjects were already on antidepressants and failing to respond to them."

Bone density may also be enhanced by omega-3 intake. "Osteoporosis is lower in populations who eat more fish, such as Asians, when compared to Europeans who eat more calcium-containing foods," said Bruce Watkins, nutrition professor at Purdue University. The mechanisms aren't completely understood, but omega-3s may help support bone formation.

Omega-3 may also benefit the skin.The Greenland studies with Inuit populations found they don't suffer much from psoriasis, a skin disease that causes painful inflammation, redness and scales. Laboratory studies have found that omega-3s suppress the hyperproliferation of skin cells, which causes psoriasis to spread. When researchers tested the impact of omega-3s on people with psoriasis, after 10 weeks, 60 percent of subjects experienced a decrease in the area of skin affected by the condition and a decrease in cell proliferation and skin inflammation.

Apparently, the dose is essential. As the authors have said, while the work is promising, more research is needed to understand the mechanism and doses, and why it works for some but not others.

Just as omega-3s inhibit proliferation of skin cells which cause psoriasis, new research is finding it inhibits proliferation of cancer cells in the breast, prostate and colon. This is a new area of research that hasn't been tested widely. But, a new study found breast cancer patients responded better to chemotherapy and the cancer was less likely to spread when patients were given omega-3 fatty acids. And, there is epidemiological evidence that men who eat more fish have a lower risk for prostate cancer. [Omega-3 in Fish May Reduce Breast Cancer Risk]

There is also evidence that omega-3s may help prevent Type 2 diabetes and improve the effects of diabetes by reducing insulin resistance.

The U.S. Food and Drug Administration recently approved omega-3s for infant formulas because of the overwhelming evidence that it improves cognition and visual functioning in children. (A mother's breast milk provides it naturally, especially when the mother regularly eats fish.)

The studies are just beginning. More research needs to be done to understand who will benefit most from higher levels of omega-3s in their diets. Your genetics and environment play large roles in responsiveness to omega-3s. And while studies are very promising for a wide range of illnesses, the optimal amount of omega-3 and the ideal ratio of omega-3 to omega-6 are still hotly debated in the scientific community.

What isn't debated is that adult women need atleast1.1 grams of omega-3s daily, and adult men need 1.6 grams, according to the Institute of Medicine's Food and Nutrition Board. Unfortunately, Americans don't come even close to getting their omega-3 requirement. But they used to. Apparently, in humans' earlier evolutionary stages, plenty of wild greens, lean animals which grazed on high omega-3 grasses, and fish high in omega-3s were consumed, and humans evolved a need for it.

But today, omega-3s have largely been replaced with omega-6s in vegetable oils, especially soybean oil, which is used in large doses in processed foods and fast foods. And no longer do our animals graze on high-omega-3 grasses, but on grains instead. This changes the fatty acid composition of the meat, to our detriment.

Most research studies have found a positive benefit with 500 to 1,000 milligrams of omega-3s per day.The American Heart Association (AHA) recommends all adults eat a variety of fish, particularly oily fish, at least twice weekly, which would provide an average of 500 mg daily. For patients with coronary artery disease, AHA recommends 1,000 mg daily, or double the seafood requirement(but never above 3,000 mg without a doctor's supervision).

Supplements are effective and may be used instead of eating the fish. Due to environmental pollutants found in fish, experts recommend women of childbearing age keep fish intake to no more than 12 ounces per week. But omega-3 researchers believe the risk of not getting enough omega-3 in your diet outweighs the potential risk of pollutants.

There are possible dangers to taking too much omega-3 supplement. The human inflammatory response results from a person's immune system working, or overworking — meaning omega-3s are actually reducing your immune response when they reduce inflammation.

This suppression of the immune system could be an explanation for the recent possible connection between prostate cancer and high omega-3-fatty acid in the bloodstream. However, that is a single study and the issue needs more research.

With high doses of omega-3s, there is also a slight increase in risk for hemorrhagic stroke or excessive bleeding. So, people with compromised immune systems should take large doses only with a doctor's advice.

As usual, I have to underscore balance. It may be safer to stick with food sources and not supplements so you don't go overboard and are more likely to stay in balance.

Studies of the vegetable source of omega-3, alpha-linolenic acid (ALA), are promising and showing positive benefits. However, the nutrient — found in flaxseed oil, walnuts and canola oil — is not as potent as marine-derived omega-3 from fish. The body has to convert ALA into DHA and EPA, which means vegetable sources are less potent than fish oil. But, it's still a great idea to include those sources in your diet.

Tallmadge's most recent Op-Ed was GMOs Are a Grand Experiment on Health, Environment and her additional contributions are available on her profile page. Her latest book is "Diet Simple Farm to Table Recipes: 50 New Reasons to Cook In Season". The views expressed are those of the author and do not necessarily reflect the views of the publisher. This article was originally published on LiveScience.com.