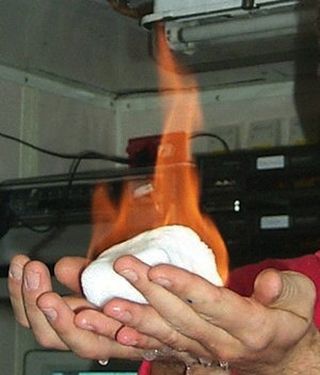 When brought to the surface, methane gas will escape from the hydrate and can be burnt off as seen in this picture.
(Image: © Department of Energy)

The beautiful, stark scenery of the Arctic may be priceless, but the warming of the region could come at a great cost to the world.

The Arctic's rapid warming could cost the global economy more than $60 trillion if melting permafrost releases huge quantities of methane, a potent greenhouse gas, a new study finds. The cost nearly mirrors the $70 trillion size of the world economy in 2012.

Permanently frozen ground, called permafrost, beneath the Arctic's East Siberian Sea could belch out 50 billion tons of methane at any time, researchers said in an analysis published today (July 24) in the journal Nature. More than a trillion tons of methane is thought to be trapped in the Arctic Ocean's icy marine sediments in the form of what are called methane hydrates, some of it in shallow water.

As the Arctic sea ice cover shrinks and the Arctic Ocean warms, the frozen sediments may thaw and release the stored methane, said study co-author Peter Wadhams, an oceanographer at the University of Cambridge in the U.K. Plumes of methane gas have already been rising each summer in the East Siberian Sea, Wadhams said.

Because methane traps atmospheric heat 25 times more efficiently than carbon dioxide, a sudden Arctic methane release would have a catastrophic effect on the global climate, the study authors said. [What are Greenhouse Gases?]

Adding 50 billion tons of methane to the atmosphere would hasten this century's predicted 3.6-degree Fahrenheit (2 degrees Celsius) global temperature rise by 15 to 35 years, the researchers said. (Climate negotiators hope to limit planetary heating by that 2-degree C target, though the Intergovernmental Panel on Climate Change uses a range that goes up to 4 degrees C (7.2 degrees F).)

The global costs of climate change would come from sea level rise, extreme weather events, crop damage and resulting poorer health, the researchers said. Most of the financial damage is predicted to hit hardest in developing countries in Africa, Asia and South America.

"Roughly 80 percent of the extra impacts will occur in developing countries. Developing countries are more vulnerable to climate change," said study co-author Chris Hope, an economist at the University of Cambridge.

The economic impact of the methane release was the same whether all of the gas was released in one giant burp or dribbled out across 30 years, the study found. "In nearly every case, the mean extra impact is close to $60 trillion," Hope said.