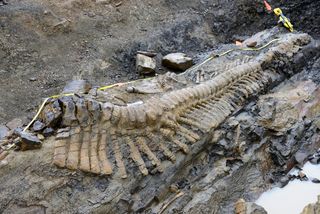 This is the first intact dinosaur tail to be discovered in Mexico. Fifty vertebrate of have been uncovered so far. Credit: Mauricio Marat / INAH

A giant dinosaur tail has been uncovered in northern Mexico, paleontologists announced this week.

The well-preserved tail measures about 16 feet (5 meters) long, contains 50 vertebrae, and seems to have belonged to a hadrosaur — a duck-billed dino that lived about 72 million years ago. Hadrosaurs grew to be about 40 feet (12 m) long, so the tail would have taken up just under half the length of its body.

Buried within sedimentary rock in the desert region of Coahulia, this is the first intact dinosaur tail of this size to be discovered in Mexico, and only one of a handful that has been discovered around the world, according to a statement from the Mexican National Institute for Anthropology and History (INAH). Back in 2008, archaeologists reported the discovery of another hadrosaur, dubbed Velafrons coahuilensis, found in Coahulia. That specimen likely belonged to a juvenile dinosaur; even so it the youngster would have been 25 feet (7.5 m) in length, suggesting V. coahuilensis adults grew to a whopping 30 to 35 feet (9 to 10.5 m) long. [Gallery: Gorgeous Dinosaur Fossils]

A group of locals discovered the fossil in June 2012. Paleontologists with INAH and the National Autonomous University of Mexico spent about a year surveying the area, and began their excavation on July 2.

The team has uncovered other bones from this dinosaur aside from tail vertebrae along the way,  including its hip bone, and believes that more of the animal could be buried deeper within the rock. They originally planned to dig a plot 10 feet by 20 feet wide (3 by 6 meters), but have since decided to expand to 13 feet by 26 feet (4 by 8 meters) to follow the sprawling orientation of the bones, said excavation-leader Felisa Aguilar in a statement.

Aside from providing a valuable addition to the world's limited collection of intact dinosaur fossils, the team hopes their findings will help explain the mechanics of how hadrosaur tails moved, said team member Angel Ramirez Velasco from the National Autonomous University of Mexico in a statement.

The bones will be transported in separate parts to the city of General Cepeda, where they will be cleaned and analyzed in further detail.