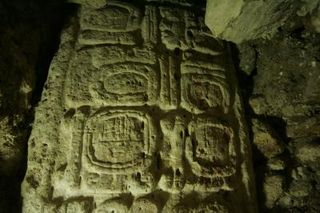 A nearly 1,500-year-old Mayan stone monument, inscribed with a story of an ancient power struggle, has been unearthed in Guatemala.

The stone slab, which dates to A.D. 564, was found in a small tunnel that adjoins the tomb of an ancient queen beneath the Mayan temple at the site of El Perú-Waka'.

The slab, almost 6 feet (2 meters) high and 3 feet (1 m) wide, is carved with the image of a large man in its center, and is inscribed with Mayan hieroglyphics. The text on the monument describes a tumultuous seven-year period when two dynasties battled for rule of the ancient kingdom.

Prior to discovering this monument, no one knew the names of Mayan rulers during the sixth century.

"It really does advance our knowledge of the history of this royal family and dynasty," said study co-author David Friedel, an anthropologist at Washington University in St. Louis.

The Mayan empire flourished in southern Mexico and parts of Guatemala for about six centuries, then mysteriously collapsed around A.D. 900. The Mayans built the massive city of Tikal, developed a hieroglyphic writing system and their own calendar, which infamously predicted the world would end in 2012.

However, because they usually wrote on paper, rather than stone, "most of their writing is gone," Friedel told LiveScience.

Earlier this year, Friedel and his colleagues were excavating the Mayan tomb of a royal woman named Lady K'abel, when they uncovered the massive stone stele. Carved into the stele was the outline of a man cradling a sacred bundle in his arms, and there were inscriptions describing his feats on the sides of the monument.

Though the stone was worn away in the center, the inscriptions on the side remained readable. [Photos: First Glimpse into a Mayan Tomb]

The team deciphered the inscriptions to reveal that a king known as King Wa'oom Uch'ab Tzi'kin, or He Who Stands Up the Offering of the Eagle, likely dedicated the stele to his father, King Chak Took Ich'aak, or Red Spark Claw, in 564. Both names were lost to history until now.

Because the Mayan calendar date was written on the slab, the team knows the exact day on which it was dedicated.

The inscription reveals that the death of the father, King Chak Took Ich'aak, in A.D. 556 ushered in a period of political turmoil as different groups grappled for supremacy.  His son ultimately took the throne.

The stele also describes a royal woman, Lady Ikoom, who was a holy person and probably the mother of the king who dedicated the stele.

The team hypothesizes that the stele is so worn because it was exposed to elements aboveground for over a century before being brought into the tomb in A.D. 702.