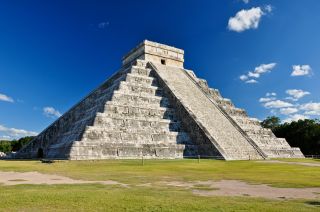 El Castillo is a pyramid with 91 steps on each of its four sides.
(Image: © jgorzynik | shutterstock)

Chichen Itza is a city in Mexico’s Yucatan peninsula that thrived between the 9th and 13th centuries A.D. Although a wildly popular tourist attraction, archaeologists are still trying to figure out how this ancient urban center, more than 740 acres (300 hectares) in size, came to be.

The city’s art and architecture show a blend of Maya and Toltec influences. It has these features even though the Toltec capital of Tula is about 800 miles (1,200 kilometers) away. Making matters more complicated is that at a later point in the city’s history (the 13th century) a group called the Itza settled at the site. The name of the city means “the mouth of the well of the Itzas.”

Maya sources tell a story of a man named K’uk’ulkan (feathered serpent) who came from the west and established his capital at Chichen Itza. Whether this story refers to Toltec groups or Itza groups, or is mainly mythical, is a matter of debate.

In any event the monuments left behind by the city’s inhabitants are some of the most spectacular in the New World. The residential areas are not as well-explored but do include houses with columns.

At the heart of the city lies the step pyramid known as El Castillo (Spanish for the “castle”). A 16th-century Spanish bishop, Diego de Landa, referred to it as the “Temple of K’uk’ulcan,” the name of the legendary ruler of the city as well as an ancient snake deity.

When the temple at top is included, it rises about 100 feet (30 meters), with each side being 180 feet (55 meters) at the base. On each of the pyramid’s four sides are 91 steps, making 364 in total. When you add in the step taken to enter the temple the total number of steps comes to 365, the number of days in a year.

“The corbel-vaulted temple at the summit of the four breathtaking stairways is a curious mixture of indigenous and foreign, Flower Mountain masks [a Maya feature] embellishing the exterior, reliefs of tall war captains from Tula [the Toltec capital] being carved upon the jambs of its doors,” writes archaeologist Michael Coe in his book "The Maya" (seventh edition, Thames & Hudson, 2005).

Coe also notes that archaeologists have found the remains of an earlier pyramid beneath this one. Finds from that structure include a stone throne in the shape of a “snarling” red jaguar, with jade eyes and shells used for fangs.

Temple of the Warriors

Beside the pyramid, just to the east, lies the “Temple of the Warriors.” Rows of columns lead up to the structure’s stairway entrance, the heavy use of columns being a Toltec feature.

When you climb the stairs you see a pair of feathered serpent statues, heads on the ground, gazing at you. You also see a statue of Chacmool, a legendary messenger of the gods. The statue is in a reclining position, his stomach being flat, it’s been speculated that the flat area may have been used to sacrifice a human heart.

To the south of the pyramid lies a snail-shaped building that appears to have been used as an observatory by the city’s inhabitants; the Spanish named it the “Caracol” (snail).

Its four entrances lead to a narrow passageway that “coils upward like the shell of a snail” leading to a chamber with three surviving windows, writes archaeo-astronomer Anthony Aveni in his book "Empires of Time: Calendars, Clocks and Cultures" (I.B Tauris, 2000).

Aveni points out that the building is aligned to Venus and “according to Spanish chroniclers, the Caracol’s round shape symbolized Quetzalcoatl-Kukulcan, the Venus deity,” the planet being of particular religious importance to the ancient Maya.

To the west of the pyramid lies the great ball court, the largest in Mesoamerica. Bound by small temples at either end, it runs for 490 feet (149 meters), longer than a modern-day American football field. Much of the court is encompassed by walls 27 feet (8 meters) high and about 99 feet (30 meters) apart.

Each wall has a vertical ring, decorated with intertwined serpents, which is about 20 feet (6 meters) off the ground. That’s twice the height of a modern-day NBA basketball net.

The ancient players would have used a small rubber ball to play. It’s not known what the rules were but the players likely had to get it through the opposing team’s ring. Panels near the ball court depict skulls on racks and one depiction shows a person (possibly a player from the winning or losing team) being sacrificed, his blood turning into serpents as it leaves his body.

North of the pyramid lies a causeway 900 feet (274 meters) long that leads to a deep well that is known today as the Sacred Cenote. People (as human sacrifices) and artifacts (including items made of gold) were tossed down into it. The practice appears to have reached its peak after the city went into decline in the 13th century.

Bishop Landa wrote (in translation) that “into this well they have had, and then had, the custom of throwing men alive as a sacrifice to the gods, in times of drought, and they believed that they did not die though they never saw them again ...”