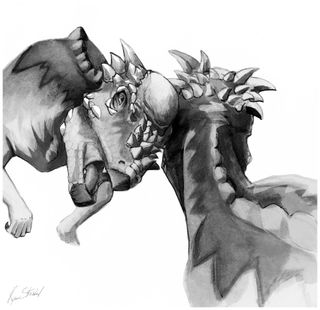 Pachycephalosaurs may have butted heads in combat, which may account for the frequent evidence of injury found on their skulls
(Image: © Ryan Steiskal)

Dinosaurs with giant domes on their heads may have used their extra padding for head butting, new research suggests.

An analysis of pachycephalosaurid skulls revealed head wounds likely incurred during combat. The pattern of wounds, described July 16 in the journal PLOS ONE, suggest the dome-headed dinos butted heads, just as bighorn sheep do today.

"About 20 percent of the over 100 domes we looked at showed some kind of injury on the surface," said study co-author Joseph Peterson, a paleontologist at the University of Wisconsin Oshkosh. "Whether they were actually getting these injuries from head butting we can't know, but it definitely fits."

Throughout the animal kingdom, fighting among members of the same species is common. For instance, crocodiles often bite each other's faces when fighting over territory, and bighorn sheep lock horns when competing for mates. [Album: Animals' Amazing Headgear]

Fossil evidence suggests that other dinos had their squabbles as well. For instance, stegosaurus fossils often contain evidence of injuries to their tail spikes, probably from swipes at rivals. And Tyrannosaurs rex fossils were often found with bite marks attributable to other T. rex, Peterson said.

Pachycephalosaurs were small, plant-eating dinosaurs that roamed throughout the world during the Late Cretaceous Period. They varied in size, but they all had incredibly thick domes made of bone on the tops of their heads. [See the Dome-Headed Dinos]

"Most had these big domes that are surrounded by a ring of spikes," Peterson told LiveScience. "Some of the domes can fit in the palm of your hand, and some are about the size of a bowling ball."

Anecdotally, paleontologists unearthed dinosaur fossils that often had damaged skulls and suspected combat was to blame, but proving such a behavior is particularly tricky.

To better understand these dinos' behavior, Peterson and his colleagues went to museums around the world to study the fossil remnants of the dome-headed dinos. The team analyzed skulls from more than 100 specimens.

Roughly 20 percent of them sustained wounds. In addition, the wounds were consistent with combat: Many of the domes had pits often caused by skin infections that spread to the bone, Peterson said. Head butts could break the surface of the skin, which would sometimes become infected.

The findings suggest that the pachycephalosaurs may have head butted each other with their massive domes, possibly to defend territory or attract mates.

Other scientists had proposed that the domes were used as a display to lure potential mates. But it's possible the domes served both purposes, Peterson said.

"If these structures really were used as weapons, sometimes animals would show the weapon off — first as a symbol of fitness — and sometimes, they would have to use them as well," Peterson said.