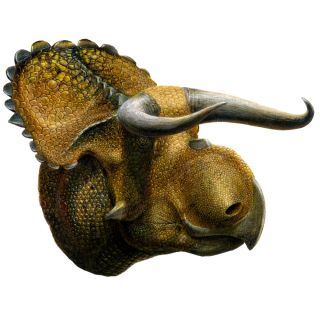 Horned mega-herbivores such as Nasutoceratops (pictured here) and the iconic Triceratops thrived during the late Cretaceous Period.
(Image: © Lukas Panzarin)

The fossilized remains of a newly identified dinosaur with horns so long they would put Triceratops to shame has been discovered in the Utah desert.

The new species, described today in the journal Proceedings of the Royal Society B, was dubbed Nasutoceratops, which translates to "big-nosed horned face." The giant beast lived roughly 76 million years ago and was part of the ceratopsid group, which consists of plant-eating, rhinoceros-like dinos, including Triceratops.

Though the region is parched now, during the Cretaceous Period, when Nasutoceratops  lived, Utah was full of dense, leafy forests, streams and swamps that made it resemble the Mississippi Delta of today.

At that time, a shallow sea split North America in two, and many animals lived on a long, skinny continent called Laramidia that spanned from Alaska all the way to Mexico. The narrow strip of coastline was a hotbed of dinosaur diversity. During this time period, many of the iconic species, from duckbilled dinosaurs to the biggest Tyrannosaurus rex, flourished.

The emergence of flowering plants several million years earlier probably allowed mega-herbivores, such as the imposing Triceratops, to evolve from smaller herbivores that were about the size of a house cat, Loewen said.

Loewen and his colleagues unearthed two specimens several years ago in the barren deserts of Grand Staircase Escalante National Monument in Utah. One of the specimens included a mostly intact, 6-foot-long (1.8 meters) skull, along with parts of the creature's spine and a few fragments of its legs. The other specimen contained just a few fragments of skull.

The team dubbed the animal Nasutoceratops titusi, with the second part of the name honoring paleontologist Alan Titus, who works at the monument.

The majestic herbivore was roughly 16 feet (5 m) long, and a relatively austere frill with little ornamentation surrounding its head. The dinosaur had a long, flaring snout and absurdly long, curving horns that stretched almost to the tip of its nose.

The researchers have no idea whether these specimens were male or female, so the scientists can't say whether such ornamental headgear was unique to males, as is common in modern-day deer. It's also possible that similar horns adorned the heads of both sexes, as is the case with modern water buffalo, Loewen said.